Overcrowding in China: The Cons are Obvious, What About the Pros? The word ‘crowded’ takes on a whole new meaning in China. Seas of pedestrians, jam-packed buses and subways, and stand still traffic jams are a everyday occurrence in China’s major cities. Not to mention during national holidays, when traveling can be a real nightmare with top cities and tourist sites even more crowded than usual. In the words of a Chinese newscaster, a mountain hike during October’s National Day won’t bring you much more than views of rear-ends on the way up and tops-of-heads on the way down. For those brave enough to venture out to the Forbidden City during Golden Week, good luck catching sight of the ground among the sea of bodies. 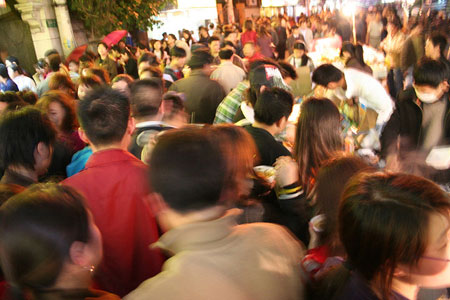 Overcrowding during holidays and at attractions isn’t an entirely bad situation for China, although it’s often hard to see it in a good light. The ability of that many people to travel around the country highlights the middle classes’ newfound wealth. Bank of America Merill Lynch economists believe that the recent tourism-related overcrowding suggests stable employment, rising wages and robust consumer confidence within the nation. According to research, “Strong data also indicates a rebalancing from savings/investment to more consumption, an upgrading of consumption from necessities to leisure and luxury goods, and better infrastructure to handle and accommodate the rapid rise of tourists.”

Chinese people aren’t only traveling around China. It is estimated that more than four million Chinese tourists will visit Thailand over the course of 2013. They are flocking to countries around the world not only for sight-seeing but also to indulge in shopping for both local products and world-renowned luxury goods.

This year’s National Day holiday (October 1-7) was a particularly astonishing one in terms of numbers. The tourist industry recorded a 20% bump in visits from the previous year. According to Xinhua, improvements in transportation infrastructure, particularly high-speed railways and highways, has played an essential role in providing cheaper, faster and more convenient means of travel. The rapid growth of hotels and budget lodging has also helped in making travel more affordable and comfortable. The article goes on to note that this year’s relatively comfortable weather across the country, toll-free expressways, admission ticket discounts, and lower gas prices made it an ideal time for travel, at least in theory.

Unfortunately, the reality of more than 31 million people traveling around the country led to a less than favorable trip for many. The toll-free expressway and a 2.8 percent cut in fuel prices during National Day seems ideal, but obviously leads to a clogged system of highways that can come to a complete standstill. The development in transportation infrastructure is wonderful, but high-speed trains are struggling to efficiently and effectively move the traveling masses during peak travel seasons. Armed police were even called in to help evacuate crowds at tourist sites during this year’s ‘Golden Week’ holiday. One case worth mentioning took place at Sichuan Province’s world-famous Jiuzhaigou Valley, where tens of thousands of people were stranded for hours after angry tourists blocked roads causing hours of delays. Other noteworthy incidents include the five metric tons of trash left by the 110, 000 people who watched the flag-raising ceremony in Beijing’s Tiananmen Square, and the 7,000 cigarette butts left behind at Hangzhou’s West Lake.

As mentioned before, people aren’t only spending their precious holidays touring around China; they are embracing this new-found opportunity to see the world beyond China’s borders. However, the growing number of visitors from the world's second largest economy has been a mixed blessing for the rest of the world. While countries welcome the Chinese’s deep pockets and generous spending, they have also been agitated by their obnoxious behavior.

In an effort to reverse unfavorable stereotypes of Chinese tourists, the National Tourism Administration has put into effect China’s first tourism law and has also issued an illustrated 64-page “Guidebook for Civilized Tourism” reminding tourists not to spit, litter, urinate or defecate in inappropriate places, “scribble” on historical relics, or pick their nose in public.

Overcrowding is a source of major irritation for Chinese tourists, and has generated heated discussions online. Some netizens believe that the problem can be alleviated by abolishing long holidays, like Golden Week, and carrying out the policy of paid vacation as it would help space out the crowds and smooth spending. If you’re working in China, you probably already know that paid vacations are still a luxury for most people. Despite laws and regulations granting a number of days (usually between 5 and 20) of paid holidays each year for workers, this right is often ignored, especially in private companies. Even though companies grant ‘holidays’ to their workers, the time is almost always made up in weekend work, sometimes requiring long stretches of work without any days to rest.

The government seems to be re-thinking their messy holiday schedule, and authorities even set up an online poll on three major news outlets to gather public opinion on the issue. As one might expect, the outcome revealed that a majority of voters were dissatisfied with the current system and think change is in order. China’s cabinet claims that the system of paid vacation will be fully in place by 2020. However, opponents to this rule argue that it will only benefit those working in government organizations and state-owned enterprises; factory workers or those in private enterprises will simply have their requests denied. Only time will tell – but for the next seven years at least, continue to heed caution when making your national holiday travel plans.

rising wages? middle class wealth? what a joke, they still earn like nothing even in cities like shanghai. They effort a 500 rmb trip to somewhere because they save for it long time. You can come back with your "wealth" and "rising wages" when they can travel international like most people do for holiday in other countries

only good point is you get to choose which Chinese girl to marry.

Population is the death nail that drives into China's heart; it is something they cannot fix even if you give them 100 years. Well, short of starting WW III and wiping out Europe, USA, Japan, ...etc. and get their people living there. Even if their GNP rises above developed countries like USA (which they are dreaming of), the 1.3+ billion would still live in concrete caves, with only a few living in monster mansions. This is also one reason why China's best and brightest choose to get the hell out. Of all people, they know there is no hope living the life they want at the country they are born in.

How on Earth is overcrowding a good thing? And even if they were poor China would still be overcrowded....It's just too many god-damn people here....as simple as that

rising wages? middle class wealth? what a joke, they still earn like nothing even in cities like shanghai. They effort a 500 rmb trip to somewhere because they save for it long time. You can come back with your "wealth" and "rising wages" when they can travel international like most people do for holiday in other countries

I went to Wudalianchi national park during the October break and it was far enough out of the way to be a wonderful experience. The idea of changing the holiday structure is really the obvious answer. Even in my own country I would avoid traveling during the school holidays at all costs and during which time flights, accommodation, shows and generally everything associated with the holiday period is more expensive. Change in China always takes time so the holiday periods granted now and the make up of the days off by working weekends will probably remain a bit longer but it sure is one pain in the arse and is the reason more Chinese tend to go overseas to get away from the crowds at home.

Do the society a favour and don't have children? :-p