I’m a bit of a party goer, guilty as charged. After a long hard slog at the school teaching I like nothing better than to head down town and have a beer or five, and if I’m with a big group of friends, I’ll even try and make it to a dance club if possible.

Chinese clubs, as I’m sure we all know, can vary in quality and clientele. The scale ranges from champagne ridden luxury wine bars to the smoke-induced hazy pits where people rattle their dices among the many, well…dodgy characters shall we say. Given the fact that I’m on a teacher’s salary, I’d like to say that the clubs I frequent are something between the two, though often end up in places looking more like the latter. I don’t mind so much though as long as I’m with good company, as these places are where some of China’s weirdest scenarios unfold. 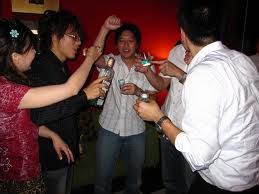 Sure, we’ve all heard of the sleazy businessmen, the endless, noisy dice games, the excessive and relentless shouts of “GANBEI!”,but I want to touch on a subject that has really bemused me during my time here, though not in a bad way. Fellow expats may have also noticed this obscurity, and I hope I’m not the only one who finds it strange, yet wonderfully endearing. It’s the music they play in these clubs.

Yes, amid the ear-bashing eighties techno/dance tracks,there are little gems to be found, if you’re sober enough. The other night during a trip to the bathroom my attention was brought to pounding drums ,heavy guitars, and…German. Yes, it seems that industrial metal band Rammstein have found an audience here, though no one here (I guess) would know it, and I thought it ever so surreal that here I was, sitting in a bar in China with a load of Chinese guys hammering away with dice games, listening to Rammstein. 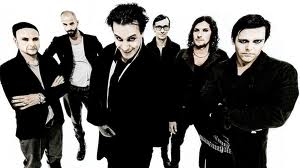 Other random musical discoveries in bars have been “I’m Gonna Be (500 miles)” by The Proclaimers, which after being put on caused the whole bar to stand up and perform a miraculously in-time soldier-like dance, as well as a Korean song that simply repeats the words “Darling” endlessly to a soft piano tune (which is promptly followed by Gangnam Style, which causes chaos in general). A peculiar mix of Nirvana’s “Smells Like Teen Spirit” has also made its way into the DJ booth, though judging by the horrendous techno drum loop played over the top I can only assume that Kurt Cobain is turning in his grave.

I’ve now got a new inspiration to stay sober during my ventures in Chinese clubs, and if it means hearing some random/long lost song from the archives of Western music then so be it. Still, I can’t see them topping Rammstein any time soon.