Some Observations of Swimming Antics in China

It was about October last year that I spent over 2,000 RMB to sign up for a year pass swimming card at the Beijing Olympic Sports Centre which allowed me to swim 80 times. I did the maths on the spot and calculated that it added up to 25 RMB a swim if I used the entire card up. Of course, that would mean I would have to go swimming at least once or twice a week, which despite my busy work schedule I was determined to do.

Of course, this didn’t happen, as I found myself generally being pretty lazy and preferring to head home and relax after a hard day’s work. It wasn’t until recently in fact – now that the summer is here – that I’ve been really going for it at the swimming pool, and I’ve been doing my best to get my money’s worth all the while keeping fit at the same time.

So what observations can be made about the Chinese swimming pool? Well I’ve been in pools here before and I’m sure I don’t need to go into any detail regarding the...off putting things shall we say… that many of us have surely seen before. I assumed, that as this was the Olympic Sports Centre, or the Ying Tung Natatorium to be precise (used during the 2008 Olympics), that I’d be getting a slice of quality. The pool itself is very nice; the water is clean, and the showers aren’t too bad either. However as I often have to remind myself that I’m still in China, my fellow swimmers have been a little less desirable that I could have expected.

Upon walking into the changing rooms for the first time, I was greeted by hordes of stark-naked men walking around. Fine, I said to myself, not exactly ideal but I’ll just avert my eyes. In the UK, we have private changing cubicles at swimming pools, though what really surprised me was the general openness to nudity as I was always under the assumption China was ultra-conservative regarding exposure. Anyway, moving swiftly on to the shower room. All sense of privacy is once again thrown out the window, and despite the showers being pretty powerful and nice and warm, the aforementioned nudity is accompanied by one of our favourite sounds in China – the sound of hocking and spitting. People really seem to go for it in the showers here, with some guys sounding like they are literally coughing up their lungs. I know the pollution in Beijing is pretty bad, though I’ve never understood why there has to be such a loud noise during the whole spitting process.

Now the swimming pool. As I mentioned, the swimming pool that was used during the 2008 Olympics, is, as expected, pretty damn good. However the habits of fellow swimmers ruin the experience somewhat. There’s the people who either swim incredibly slowly or simply hog the middle of the lines so swimmers coming from either direction are blocked. I have to shout out “kao you!” (move to the right!) half the time. Then there’s the swimmers who deem it necessary to fully extend their arms and fists when doing the front crawl. I’ve actually been hit several times from people in the neighbouring lane whose arms reach over and thump me in the side of the head. Of course during a weekday evening, the pool can get pretty packed and there’s not a great deal of space. However it doesn’t help when everyone is still in the “I’m the only one here” mentality, which inevitably causes collisions in the swimming lanes and people (especially me) getting peeved off in general.

Oh and the icing on the cake has to be the spit vents that are set up at either end of the pool. At first I condemned them and just wondered as to why can’t they just stamp out spitting with heavy bans or fines. But I suppose it’s an improvement on swimmers who perhaps would normally spit in the pool. Still, there are still those heavy hocking and spitting sounds nonetheless.

Anyway rant over. All in all and interesting experience that above all teaches me to remind myself that wherever I go or how much money I spend, I’ll still be in China. 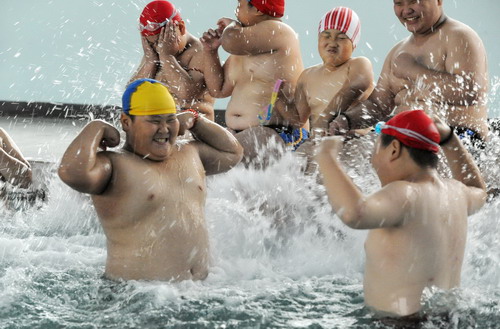 Spit vents??!! Really??!! Interesting observations. Modesty prevents me from being too crude but the openness in spas and pools certainly highlights a size issue doesn't it?