TEFL – On How It Spawns the Most Interesting of Characters

As an on and off teacher in China for several years, I’ve met a fair share of different students, been treated and scammed equally by different schools, and have of course come across a varied selection of teachers; with some leaving me inspired and some leaving me grateful that I haven’t (yet) gone down the path of a quasi-alcoholic Peter Pan-syndrome serial country hopper.

Yes living and teaching in China has introduced me to some of the most interesting people I think I’ll ever meet. Everyone has their own stories, reasons, motivations for doing what they’re doing, and amid the mixed up chaos there’s always time for some quality bonding sessions down the expat bar where we all seem to get along like best friends within two or three minutes of meeting. It’s like we’re kindred spirits; equally abroad in strange lands (and arguably directionless), finding solace among folk that we can joke about failed lesson plans, the time when four year-old Tommy swore in the classroom by mistake, or just revel about our 20 hour a week working lives.

One thing that does concern me is the eventual development of myself from, at least what I consider in my eyes, to be a relatively normal 20 something male into a neurotic, directionless 30 or 40 something later down the line should I stay in the industry. We’ve all met those hopeless unemployable teacher types – the ones who show up drunk to class, have multiple financial issues and are possibly emotionally unstable, and it’s obvious to anyone with half a brain to steer clear of such people. However, the “normal” folk that I’ve come across here who’ve been in the TEFL industry for a while do also show similarly undesirable attributes at times that makes you wonder if the ever-changing environment of a TEFL teacher has some adverse effects on even the most normal of people.

Take my former employer. 20 years in TEFL, lovely guy, loved his job, worked his socks off (for pretty much peanuts), and was an upmost professional in the office. Cue punch out time however and it’s down to the local watering hole for beers until 2am with occasional emotional outbursts, all of which were completely forgotten the next day as she showed up to work at 8am. I remember when his boss came, one of the company’s bigwigs; a married man in his 40s, and after the meetings were up the boys were down the same bar once again until the early hours and embarrassingly tried to come on to a group of very unimpressed young Chinese girls. I was wondering to myself if this is normal behaviour for men in their 40s, though I can’t help but think that at the back of their minds these guys are wondering what else they could have done with their lives and are still stuck in the bodies of the fresh-faced 21 year-old when they first touched down as a TEFL teacher with the only difference being slightly higher salaries and management stripes.

I’m sure TEFL provides a fruitful, worthy career. There’s the infinite chance to travel, work a relatively light schedule (though that changes if you become a manager or “DOS” or whatever), and you can actually save a fair bit of money while you’re at it. But one thing my boss told me was that to be successful in the TEFL industry it’s great if you’re single. Basically, the nature of the job (if you want to advance) means being ready to up sticks whenever, should there be a manager’s position in another city, country, or whatever. Perhaps for these guys the result is that they get used to hopping around and not settling down, though perhaps that’s just what they want.

Anyway, In guess TEFL teaching gets a bad rep and I understand that I’m maybe not doing it any favours by writing this blog. I’m fine with that, because I also consider myself to be part of the whole package, and the guys who I mentioned above (as well as some of other eccentric teaching colleagues) are some of the greatest people I’ve ever met. I’m sure a stable career, a “normal” family life, and a mortgage bring out some equally frustrating predicaments in life  and thus affect people as such, so I guess there’s no “should” or “shouldn’t” with regard to what path you choose in life. 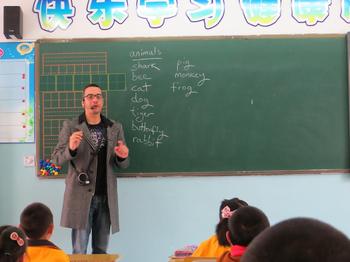 It's an interesting situation and one that I have often found myself contemplating since starting to teach here. I believe what you get out of the teaching experience all boils down to the reasons you decided to come here in the first place. From observing and talking to other foreign teachers it seems there are three different groups of foreigners who come here to teach. The first is the GAP year traveller. They come not only for the adventure but also to earn some money and a point on their university application or CV. I have a certain amount of respect for this group as it shows they are different form the traditional young western "traveller" who spends their money on full moon parties in Thailand and returns claiming to be internationally minded. The second consists of those who were bored of their lives and had heard tales of opportunity in China. Teach children their ABC's for 15 hours a week and in return you will get an apartment, a decent salary and the chance to sleep with as many Chinese girls as you can. This group makes me glad that the recent visa laws have resulted in many of them being sent home. The third group is made up of those who actually came here to teach and learn. Those who get to class early to prepare their lessons and stay late into the night helping students with their homework or even family issues. No, it may not make you rich but it will teach you more about your own language and culture than you could ever learn in your own country. As a teacher you have a duty to your students and when you fulfill this duty you get a sense of pride and accomplishment that out ways any prospect of money or leisure time. I think those coming here to teach English, along with those already here, need to have a serious think about whether they put themselves first or their students first. If it's the former then I suggest they consider a different job and if the latter then they are here for the right reasons.

I think ESL is ok if you're right out of college, but after 25 you should get out ASAP. I came right out of college to a 2nd tier city and yeah had a blast. But...the next year I moved to shanghai and got a rude awakening trying to impress european girls with the same tricks, and I realized "Oh shit, i'm fucking poor and there is no reason to think I ever won't be, so why WOULD this beautiful woman be interested in me? She's white too.". ESL teaching basically gives you the same life prospects as a cashier, but it promotes this kind of delusional fantasy where you have your own (usually crummy) apartment, a job (where you aren't respected) and (dull, at best blandly-pretty chinese) girls. As soon as I realized this, I quit teaching and went into (shitty commission only) sales. It took about 18 months of scraping by but then finally I used my finance degree to get a real job at an international consulting company, which i've had for about a year. Sales sucked, I hated it, but i had some self respect, and then by 26 I had a real career. And you know what? It is fucking awesome not being poor. Making $60k USD in Shanghai with a solid future career path makes you the same thing to the hot euro girls as teachers are to the lower-class chinese, except it actually means something because it's not just happening by default because you're white. ESL is fun at first, but you aren't responsible for anything so it shows after a while. There's no way you can move forward with it, so what are you working towards? Just to survive? You don't have THAT long after college to start a career if you want it to go anywhere. You basically need to be in the door by 25, lower management by 30 and so on. The price of wasting your 20s living carefree doing ESL is that it's going to be MUCH harder to get into a real career later. You'll be competing for entry level jobs with people 10 years younger and with a LOT more energy. Your 20s are the time when you are physically capable of handling 75+ hour workweeks...so make the most of them, then at 40 you can be living fat and enjoying all the 5-star hotels, nice cars and fun experiences that will never be in the price range of an ESL teacher.