I’ve been in China a good while now and while I can’t claim to have completely melted into the society I do believe I’ve done rather well at adjusting to the various nuances and annoyances that often have most expats either screaming at the walls or running down the street naked. The spitting, the shouting, the littering, the staring (yes even in Beijing…) I think I’ve pretty much got my tolerance mastered down to a T these days. A typical 9-5 commute means I encounter these things on a 5 day a week basis, so perhaps I have become somewhat desensitised to it all. Another way of looking at it all is that if I did let these things get to me it was have a hugely detrimental effect on my daily mental health, and even if I did try to confront these issues getting angry or scolding someone in public isn’t going to change anything. So, when it Rome, it seems.

However, there is one standout annoyance which still makes my blood boil on a daily basis. No it’s not the pollution, nor is the countless street stalls that block every nook and cranny at almost every subway exit across the city; no, it’s the driving.

I simply cannot get my head around, or accept the fact that pedestrians don’t have right of why over cars on the streets here. I understand that life in China is a big rush these days, though the constant lack of courtesy shown to the fellow man on the street frequently brings my spirits down, and that’s not even when it happens to me. There are countless zebra crossings on streets in China which are completely ignored. Every time I cross the road on one of these I make a point to put my hand out signalling a “stop” sign and then point at the fact I’m walking on a zebra crossing. I often get bemused reactions, horns blasted in my face, or worse still, yet another peg on the “reasons why Chinese people don’t like foreigners” board, which is the last thing I want to do here, though I can’t help myself.

Couple that with the fact that at every crossroad in Beijing (maybe China), there’s always a side lane where cars can drive through even when the lights are red. This means that for pedestrians, there’s never a completely safe time to cross the road. Pedestrians that walk across these roads during a red light and end up facing cars that cut across often get beeped at angrily, or even sped up on as these cars try to sneak past.

I’ve tried a couple of times to protest at this but drivers in China are so angry that it just makes the matter worse. All I can do perhaps is take it light-heatedly; I remember seeing a news item about a guy from Finland who got out in the middle of the road and did tai-chi moves to calm down angry drivers. A great idea – though when it happens on a daily basis (particularly as I have to navigate a huge crossroad on the way to and from work,) it can get pretty soul-destroying. This is the one thing that I’m still yet to overcome here in China, and I see it as either a challenge to myself to finally reach a state of mental calm so it doesn’t affect me, or a sign that I’m never going to become fully adjusted to life here. As China constantly reminds us so, there’s always a new annoyance that pops up every now and again so who knows, once I conquer this one there’ll probably be something else. Internet censorship, nationalism, war with Japan…take your pick! 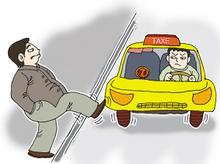 I'm from Canada, where pedestrians rule. I get the idea that cars rule in China because of the status it brings. Although there are a lot of cars on the road, not many people drive. I work at a factory with about 250 people. At most, there are about 10 cars parked in the company parking lot during the day. The people who have cars are obviously more wealthy and privileged. Look up privilige in the dictionary = "a right, immunity, or benefit enjoyed only by a person beyond the advantages of most." You just need to go with the rhythm of traffic. Cross one lane at a time, you don't need to wait until you can cross the entire road. Although you might feel exposed while wating in the middle of the road, they are NOT trying to hit you. The only time it bothers me is when it is raining hard. Out of common courtesy the odd car might let you pass since they are dry inside their vehicle, NOT! haha, they probably figure if they start letting you pass in the rain, the next thing you'll be expecting it all the time. You have to admit, in some areas, there are so many pedestrians, if cars let all the pedestrians pass, how would they get anywhere?

ah..better live in some smaller cities...its much more comfortable than in fickle big cities.

Yeah, it irritates me too! When I cross the street I always imagine they are trying to hit me, then it makes perfect sense to me,haha.