Is China’s Rise Really a Peaceful One?

Ok, I’m about to open a can of political worms with this one, though who doesn’t savour the opportunity to be an armchair pundit with almost no expertise on a subject which has been widely discussed by experts across the world? I certainly don’t, and this has been something on my mind of late. Yes China – I’m asking you: Is your rise really a peaceful one given all the recent furore over military exercises and territorial disputes? Hmmm? Well is it? ….no answer ey? Fine. armchair criticism it is then.

2012 was a pretty crazy year for Asia. We saw various territorial disputes involving China and their neighbours (namely Japan and The Philippines), which all resulted in either violent protests or the flexing of naval muscles by our favourite red country. Yes, the hotly disputed Huangyan and Diaoyu/Senkaku island issue certainly turned a few heads last year, and it’s not something I want to get into too much in this post (give me a couple of glasses of gin and I’ll get started). No, what I want to ask is whether amid all this military flexing, threats and assertions of power, is if China really does have peaceful intentions for the feature.

During the recent party congress in Beijing, Wen Jiabao stated that China would “promise to protect its sovereignty however possible,” a statement which received rapturous applause from the audience. Obviously, he was referring to the disputes mentioned above. It has also been reported that China has increased its military spending by 10% this year bringing it to $143 billion, which despite not nearly being as much as the US ($711 billion) does show a rise that is certainly ruffling the feathers of some. You could say that China is entitled to developing its military, though if you understand Chinese and you logon to a Chinese news website or watch TV, the amount of military displays and nationalistic fervour mentioned could lead you to think they’re preparing for a war. With who? Who knows, but surely an attack on Japan would not only cripple their economy but also incite American, Korean, and most likely European intervention that would surely overpower any chance China would have of winning. There is the theory that China is exercising its military power in an attempt to restore more faith in the central government; surprisingly (and worryingly) many Chinese I’ve spoken to have said that the government isn’t tough enough on foreign countries trying to compromise China’s interests, so maybe this is their attempt at rebuking this and regaining support and general nationalist fervour (and conveniently drawing attention away from issues inside China.)

The concept of a vassal state has never been away from China; a country that in its almighty power deems all neighbouring states subordinate and subject t their demands, and could China’s recent flurry of territorial claims without apparent disregard to the global community be a sign it’s getting too big for its boots? Can we differentiate between America’s wars in the Middle East and China’s territorial claims? As economic and energy problems begin to rear their heads in China, it may start getting more aggressive in the future in order to assert its power and continue its development. 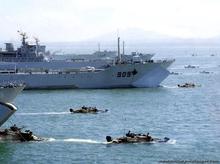 History always repeats itself. China has always been a "big and powerful" country. That didn't stop Japan from beating them senseless in the Sino Japanese war or WW2. If you read articles written before the start of the First Sino Japanese war, everyone in the world expected "big and powerful" China to obliterate "small and weak" Japan. It didn't happen. Same thing happened in WW2. Look up the battle of Wuhan in which the "best" and most well equipped soldiers the Chinese army had to offer, outnumber their Japanese counterparts 3-1, were defending entrenched positions and still found a way to lose the battle on their home turf. While Chinese propaganda has created a warped view of Chinese military prowess, the truth is that "big and powerful" China has in every recent example got their a55es handed to them by countries and armies much smaller than their own. Against another "big and powerful" like America the chances of Chinese victory are non existent. China was almost destroyed by "tiny" Japan twice in recent history. Can you imagine what would happen if they fought with someone "their own size"?