An Evening in Gulou: My Shameful Part in the Destruction of Beijing’s Hutongs

I recall an evening roughly a year ago where I was with a group of friends heading back home after a night out in one of the many chilled out bars located around Beijing’s Gulou area. In a turn of events that would surely contradict any perception of construction safety anywhere outside of China, we were approached by these bar owners who were conglomerating outside their soon-to-be-destroyed establishment, and were invited in the derelict interior to assist them in knocking down a wall using a pneumatic drill.

As it was a blissful summer’s evening and we were under the influence of one or two beers, we gladly obliged, each picking up the gigantic pieces of destructive machinery, minus (of course) any form of protective wear such as gloves and hats, and were told by one guy to “press here” as we aimlessly directed the drills towards the wall in a attempt to score yet another “hey mum, look at what I’m doing in China” moment.

We revelled at it at the time, but it has now dawned on me that that night my friends and I played a small part in the ongoing destruction of the Gulou area, which has taken horrifyingly huge steps over the past few months. I’ve always been aware that the authorities have been gradually knocking down the hutongs in favour of high rises, though I’d never actually witnesses the full effects. Now, if you take the subway down to Gulou Dajie on line 2 (which I do on a regular basis), you’re instantly greeted with regiments of cranes and bulldozers as they attempt to modernise the area. What a shame. Even the restaurant where U.S. Vice President Joe Biden famously grabbed a bite to eat during his visit back in 2011 seems to have been demolished, as the city makes way for its expansion of the subway line 8 which is expected to pierce through the heart of the old city all the way down to nearby Tiananmen. Upon looking at the future subway map, both Dongcheng and Xicheng districts are sizably carved up by new subway lines, which will inevitably see the destruction of more hutongs and siheyuans in its wake.

For me, areas such as Gulou, Houhai, Beixinqiao and Nanluoguxiang are what’s keeping me in the city. I love taking a weekend stroll and getting lost in the many winding alleys and encountering a charming, hidden bar or café that I never knew existed before. For Beijinger’s, it’s hard to say what they really feel. Proud as they are about their heritage, they may see it all as necessary processes in order to ascertain a greater status of development for Beijing as a whole. I have one friend who used to live in a hutong around the Military Museum, who told me that he and his family were forcibly moved from their homes in the late 90s. As the demolition crews loomed, the compensation given to them was nowhere near enough to buy a tiny (by comparison) flat in a high rise neighbourhood where the charming sense of community that comes with hutongs and siheyuans is totally nonexistent. I don’t know if his sentiments are shared by those across the city, but I for one am always saddened to see the destruction of these neighbourhoods and the gradual erosion of what is slowly becoming a less and less liveable city to reside in.  Next time I’m offered a pneumatic drill, I’ll remember to politely decline. 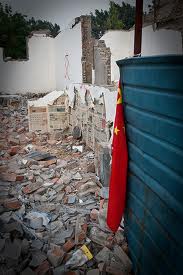