Whenever some lays mention to C-pop, Mando-pop, or even J-pop and K-pop for that matter, images of sickly sweet bubblegum vocals and soppy ballads immediately spring to mind. We need only to look at the stars famous here: Wang Leehom, Jay Chow, Li Yuchun…they’re all different masks singing the same voice. That’s not to say that there aren’t Chinese musicians worth listening to; Beijing has a thriving underground rock scene as does Hong Kong – which brings me to the point of the blog.

Wong Ka Kui, front-man of late eighties/early nineties Hong Kong rock band Beyond, died at the tragically young age of 31 after falling from a platform during a Japanese television broadcast. I’m pretty sure that Beyond aren’t too well known across the rest of the world, though I can guarantee that if you’ve live in China for any length of time, you’d have heard their music emanating from a KTV room or a car stereo. 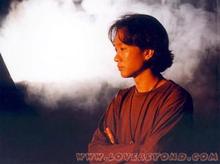 When I first discovered Wong’s quivering voice and epic melodies, the music spoke volumes to me, despite my understanding of Cantonese at the time being nothing more than simply “yes” or “no.” Amid the tunes worth listening to are 真的愛妳, (Truly Love You) 海阔天空 (Endless Skies and Vast Oceans, and光辉岁月 (Glorious Years), and after slowly familiarising myself with the lyrics, I can now sing them at KTV nights which either impresses or confuses the locals here in Beijing, I’m not too sure. Still, music has proven to be a great way of learning a language!

Many of their live shows are accessible online, and I’ve spent many an evening sitting back with a beer listening to their live shows, which although sounding a little dated and synthy, still have quite a powerful twang to them. As the current market is dominated with repetitive, uncreative figures who simply look good in the camera and have their songs written for them, Wong’s early death has had a truly devastating effect, with Beyond disbanding soon afterwards, save for a few reunions here and there. Check them out if you’re after some authentic Asian rock music!

Beijing's rock scene has exploded in the last 7 years or so, with so many good, creative bands to listen to. Nova Heart, Re-Tros, Queen Sea Big Shark, New Pants and many more have received international praise, but I also really like the lesser known bands such as Steely Heart, Whai, Residence A and countless more who are increasingly creating their own individual sounds and are exploring creative boundaries on the stage too. Then you also have the old school rockers like Dou Wei whose album Dark Dreams never gets old, Cold Blooded Animal by Xie Tianxiao is a dark, gritty album that's now legendary in music scenes, Baojiajie 53 is solid and worth listening to...and many more.

He sounds/looks like a cool dude! Will remember to check his music