Cool air has officially settled in the capital, bringing in its wake plenty of cloudy days. Continued food safety scares have added to the cloudy gloom but with plenty of great events coming up and Chinese National Day just around the corner, there is plenty to be happy about. Read on the find out more about all the happenings and events in Beijing.

1) Bad Buns
Sadly food safety scares seem to be a dime a dozen these days in China. The most recent development in Beijing is that a number of well known Zhenggongfu chain shops have been accused of adding illegal additives to their signature steamed buns. All four shops were closed for adding the illegal ‘meat essence’ additive to the filling of their steamed buns although one seller claimed it was a normal practice because without the ‘meat essence’ it is impossible to be competitive. Steam bun lovers beware! Quite the spectacle. Photo: Chinadaily

2) Market Fire
If you were in central Beijing just after 17:00 on September 5th you might have noticed some ominous dark clouds billowing into the sky. The culprit was a fire that raged through a vegetable market in Xicheng district. The fire burnt over 1,000 square metres and took over 200 firefighters to extinguish but thankfully no casualties were reported.

3) Skyscraper Construction Starts in the CBD
Buildings have been popping up all over Beijing’s CBD district over the last few years, but things are still nowhere near being done. On September 15 the latest CBD construction project got underway which when finished will be home to a 510-metre skyscraper, the tallest in Beijing, along with 17 other low-carbon buildings. If you fancy skyscrapers then head on over to the CBD over the next few months and see how construction progresses on the soon-to-be tallest building in Beijing.

4) Compulsory Sex Ed
Sex is always a touchy subject in China, with most Chinese being too shy to discuss it outside of close friends. Yet at the same time, many experts feel that a general lack of sexual knowledge and discussion presents a great risk to China’s more sexually active youth.

In an effort to combat this problem, the Ministry of Education in Beijing recently announced that all university students must take classes related to sex and love as part of a wider mental health course. School officials said such elective courses have been popular in the past, but still some students complain that while the classes address sex they do not offer very comprehensive and useful information.

1) Beijing Fringe Festival
If you like to see the productions of up and coming playwrights and dancers then head out to one of the many showings and seminars that are part of Beijing’s 4th Fringe Festival that is already underway and will run until September 25th. During the festival, over 50 theatrical performances will be staged across Beijing featuring the works of writers and directors from 12 countries. Check local theatres for more information.

2) Yugong Yishan Celebrates 7 years
Yugong Yishan has had its ups and downs over the last seven years, but one thing has remained constant, their drive to supply Beijingers with a constant lineup of great musicians from China and around the world. To celebrate their seventh anniversary on September 23rd, they will feature a great lineup of local talent including Carsick Cars, Mickey Zhang and Acupuncture. Presale tickets are 70 RMB and tickets at the door will be 100 RMB. Performances start at 21:00, but make sure to get their early if you want to get a seat.

3) Beijing Design Week
If you like art and design then prepare yourself for Beijing Design Week which will be hitting the capital soon. Design week will run from September 26th to October 3rd and will feature a wide range of activities from lectures to exhibits all over the capital—so  get out and get creative. For more event info visit the website: http://www.bjdw.org/en (English) 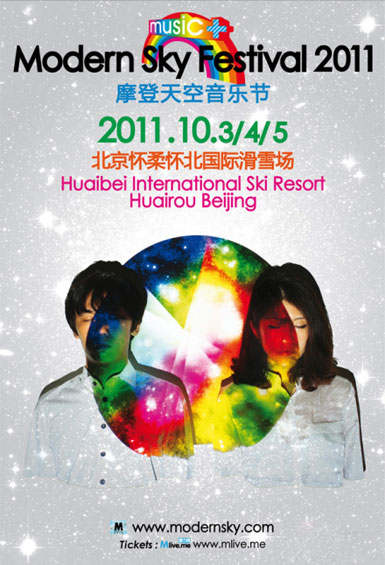 4) Modern Sky Festival
Travelling during the week long Chinese National Day break can be a nightmare with all the crowds. It will be much more relaxing to chill in Beijing and then head out to the mountains north of the city for the Modern Sky Festival from October 3rd to 5th. There, under the shadow of the Great Wall, you can enjoy a little indie-rock and electro hip-hop from bands Whip, The Go! Team, Hanggai, Twisted Machine and many more. Transport to the festival’s location at Huaibei International Ski Resort is available from Dongzhimen. Pre-sale tickets are 120 RMB (one day) and 300 RMB (3 day) or day tickets can be purchased at the gate for 150 RMB.

Hot dog lovers rejoice! Nathan’s Famous Hot Dogs, better known as the sponsor of that disgusting hot dog eating contest every 4th of July in New York, has opened their first store in the basement food court of the Raffles City Mall near Dongzhimen. Set meals of both hot dogs and hamburgers will cost in the 25-40 RMB range and are decent considering they are still fast food. Still, if you are American, there is nothing quite like eating a nice Nathan’s dog in Beijing.