Winter in Harbin: Lose yourself in frozen splendor

The cold air of recent weeks has ushered in the long-forgotten feeling of winter. As Christmas and New Year draws ever closer, catching the sight of winter snow will be the first choice for many winter travelers. And when it comes to snow, places don’t come much better than Harbin – the number one option for gorgeous silver ice and snowscapes.

The theme of this years China Harbin International Ice and Snow Festival, held on January 5th will be “Disney Ice and Snow” and the “Winter University Games”. During this annual festival Harbin will show the world the unique charm of snow and ice. 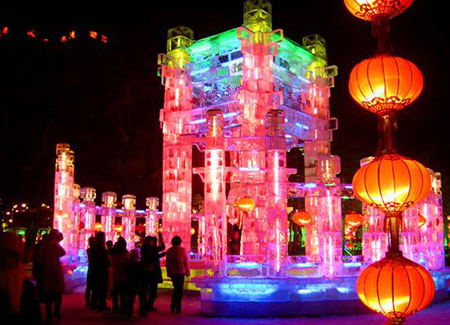 Harbin has an intimate bond with ice that will never melt, whatever the weather. With winter temperatures staying below minus twenty or thirty, it is hard to imagine that all the frozen water in Heilongjiang’s capital, will ever thaw. Originating 350 years ago during the early Qing Dynasty (1644-1911), ice lanterns have become an important part of folk culture in the north of China. They have come a long way from the simple pieces of handiwork that were displayed around two centuries ago at the first lantern festivals, to the ice flowers, ice architecture, ice carvings and all manner of elegant pieces of the frozen art that can be seen today.

The annual Harbin Ice Lantern Festival brings together the very best in ice lanterns. New pieces of captivating and innovative art are on display every year, so just like a fairytale that never repeats itself, icy Harbin is an artistic spectacle that never ends.

The boundless pleasures of skiing

Undoubtedly, the most popular forms of entertainment in Harbin are its winter snow and ice activities. There are all sorts of winter recreation available both in, and around the city: the thrills of sledging; the excitement of ice sailing; the charm of ice-skating; the endless spinning “ice monkey” (an ice spinning top); the challenge of ice-water swimming; and of course, boundless pleasure and excitement of skiing and snowboarding. Visitors can experience all of this at Harbin’s Amusement Park, Ice and Snow World, Songhua River Winter Swimming Lake, Yabuli Ski Resort, and Erlongshan Ski Resort. 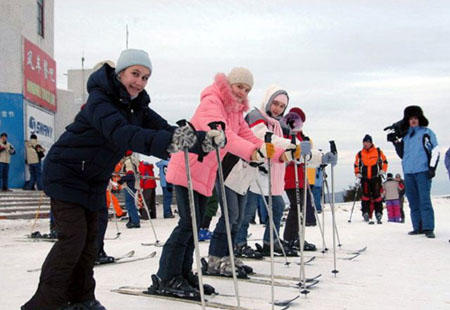 Located 195 kilometers to the east of Harbin, Yabuli is China’s largest ski resort that caters for all skill levels. According to Mr. Pierre Langue, World Tourism Organization official and French ski resort planning expert, “Yabuli has the best snow and skiing environment out of all of China’s ski resorts”.

Yabuli has used equipment imported from Germany to construct the world’s longest ski run. The slope has a total length of 2680 meters, an elevation of 570 meters, an average gradient of 10 degrees, and no fewer than 48 turns (the highest number on earth). The feeling you get from traversing this mega-run is both identical, to and totally different, from any other skiing experience on the planet. The unforgettable excitement begins from the moment you begin your 5-10 minute cable car ride to the summit, and lasts all the way to the bottom of this seemingly-endless slope.

The resort’s 15 different ski slopes, which in total cover a distance of 30 kilometers, cater for beginner, medium and advanced-level skiers. The longest run is over 2300 meters while the widest nursery slope measures 100 meters from side to side. Sailing down the slopes, some steep, others gentle, cutting through the beautiful scenic peaks and winding your way down the mountains, you will feel like you have returned to nature. 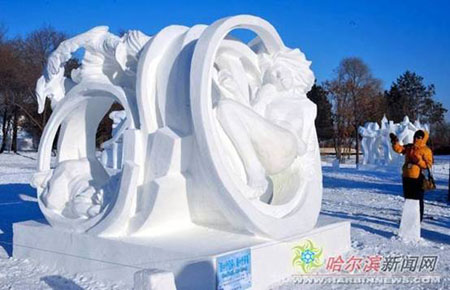 With a jade-like texture, these sculptures are art installations made mainly from artificial snow. The subject matter of these creative designs covers everything, each with rich and profound meaning. With the coarseness of rock statues and the delicacy of ivory carvings, these sculptures reflect the magic of China’s ice and snow.

If snow is the spirit of Harbin, then Sun Island, with its captivating scenery, is the temple. The snow in Sun Island – a place once named the “snow capital” – is as thick as it is white, covers the ground, spreads itself over lakes, adorns fences, weighs down tree branches, and envelops the round and pointed rooftops of the magnificent European architecture. The annual Snow Carving Art Expo always draws in large numbers of both foreign and Chinese tourists. These large crowds create wonderful scenes in the city as they walk through the snow, throw snowballs, cover themselves with slush, and just simply take in the beauty of the magical white stuff.

Transport: Tourists can ride the no. 101,102,103, 13, 79 buses and then take the ferry (return cable car ticket costs 20 yuan) for direct access to the scenic spots. Tourist buses take the direct route past Songhuajiang Bridge to Sun Island, and can be caught on Youyi Road,. 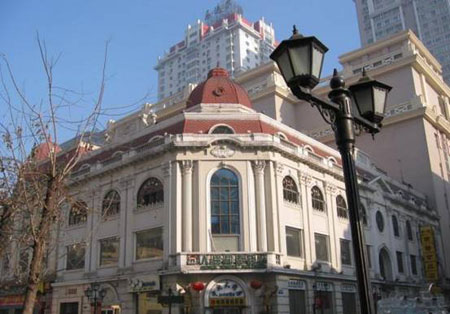 It is not just any red walls and green tiles that you notice as you walk along Central Avenue. Nor are you looking at any old cornices and archways. Standing before your eyes is row upon row of European architecture. These beautiful buildings have been inspired by the Baroque, Rococo, Classical periods as well as Eclecticism and the Art Nouveau movement. Some assert that within its hundred year-long past, this 1433.5 meter street has accumulated hundreds of years of Western architectural history. This is the world’s only historical street still in existence that combines every type of European architecture.

The annual Harbin Ice and Snow Festival is held from December each year to January the following year and when it comes to ice and snow, it is China’s number one regional holiday choice.

During the festival, tourists can see the beautiful ice lanterns and the enchanting snow sculptures; they can take in the cultural ice shows; and they can join in with all sorts of ice and snow activities. The Harbin ice lanterns and snow carvings are already considered to be some of the world’s greatest pieces of snow and ice art and if that is not enough, the large-scale winter games provide spectacular scenes during the annual festival.

Gunbing Jie, which could literally be translated as “ice rolling festival”, is a long-standing local folk tradition around Harbin. On the evening of Lantern Festival, people light candles and place them on the river, forming a variety of beautiful patterns. As well as this, people of all ages roll around on the frozen surface of Songhua River. By doing this, it is said that you can “roll” away your worries and misfortune, and at the same time, luck and happiness will “roll” its way to you.

This custom originated from an ancient legend. Once upon a time, a dragon spirit of Songhua River had a human daughter who had fallen in love with a fisherman. After becoming man and wife, the two of them began to live a happy life in the village. This enraged the dragon. Breaking the ice that covered the river with her single horn, the dragon took back her daughter and released a horrible plague on the fisherman and the villagers. Speaking through their dreams, the dragon’s daughter instructed her husband to “roll” on the ice on the evening of the fifteenth day of the first lunar month, nine times to the right and nine times to the left. By doing this, the village would be rid of the epidemic. So, on the night of Lantern Festival, all the villagers went down to the water to roll from side to side. This rather strange action rid the villagers of their terrible plague but fearing the dragon’s reprisals, they decided to do the same thing every year. This gradually formed unique custom still exists to this very day in Harbin.

Ice Lantern Festival is held during Chinese New Year and Lantern Festival. Before, each household just placed a home-made ice lantern outside in their home, but now that festivities have developed, ice lantern competitions have started take place in the public squares and recreational areas of villages and towns.

Getting around: With a starting fare of eight yuan, about twenty yuan should cover any taxi fare in central Harbin. Regular trains and buses leave from Harbin to Snow Village and Yabuli.

What to eat: Most of the restaurants are either on Central Avenue or Huanghe Road in the Development Zone. EChinacities recommend Huamei Western Restaurant (Russian Cuisine) and Russia Café, both of which are located on Central Avenue where the street meets Songhua River.

In Harbin, it is not easy to miss out on authentic Russian cuisine. In addition, eat bear's paw, try some “flying dragon”, sample "Three Flowers" and taste monkey’s head mushrooms. Since there are sumptuous feasts of every kind, trying all of Harbin’s dishes should be an essential part of you itinerary.

1. Since digital camera batteries do not work in such low temperatures, where possible, take a traditional camera. If you must use a digital camera, keep it inside of your clothing to stop it from getting too cold. Also, bring two sets of batteries so that you can ensure the camera is always switched on, if the camera is switched on, the additional heat will keep it warm. Finally, when you come in from the outside, wrap your camera in a plastic bag to prevent damage to the lens caused by the humidity from sudden heat change.
2. Harbin's winter temperatures are generally between -20 and –35 degrees, so be sure to bring insulated clothing, snow boots, hats, masks, gloves and scarves.

For information about dining, nightlife and attractions, visit the city guide of Harbin at www.echinacities.com