The World’s Most Interesting Chinatowns Outside of Asia The Chinese can be found at just about any corner of the planet, and wherever they go their culture is preserved through that most essential of ingredients to any cosmopolitan city. The Chinatown. Here is a list of some of the worlds most exciting, bizarre and fascinating Chinatowns outside of Asia. First settled by immigrants from Guangdong from the 1850’s to 1900’s, San Francisco’s Chinatown is the oldest and most iconic in North America. This Chinatown has been featured in numerous Hollywood classics, such as The Maltese Falcon and Big Trouble in Little China, and has been the home of countless Chinese Americans of note, including Bruce Lee who was born there in 1940. The original location was devastated by an earthquake in 1906, but was subsequently rebuilt to look more ‘Chinese’, and it soon became a premier tourist site, attracting visitors from across the United States and Europe. San Francisco is considered the birthplace of the Westernised Chinese Cuisine we all know and love and is now reinventing much of its food with a California twist. One exapmle of this is the growing usage of Mexican style wheat tortillas in some Mu Shu restaurants instead of the traditional rice pancakes. While this approach is earning the ire of many purists its certainly making for a more interesting food scene in the city and as such visitors continue to flock there. 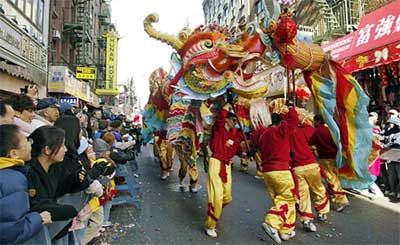 New York’s Chinatown was historically located in lower Manhattan, however the city’s increasing gentrification now means that most of New York’s Chinese population can be found in boroughs like Brooklyn and Queens. New York’s historic Chinatown features cuisine from across China, including Cantonese, Shanghainese and Szechuan. The location also features a variety of food from around Asia and even borders Little Italy, meaning that you’ll be spoilt for choice when deciding what to eat there. This variety of Chinese food stems from the fact that New York’s Chinese population is made up of a wide variety of cultures from across China, which in the past has been the source of some ethnic tensions and resulted in the appearance of satellite Chinatown’s across the city, some for Mandarin speakers, some for Fuzhou speakers, etc. Lima’s ‘Barrio Chino’ was founded in the 1850’s by Chinese immigrants, but along with the rest of the city suffered a violent decline in the 1880’s when it was looted, along with the rest of Lima, by invading Chilean forces during the War of the Pacific. Later immigration policies resulted in the city’s ethnic Chinese population dropping and further ingratiating into general society. Since the 1970’s however, the Barrio Chino has been experiencing a major resurgence and is now home to the largest ethnic Chinese population in Latin America. It is also home to ‘Chifa’, a unique Chinese-Peruvian fusion cuisine that has exploded in popularity in recent years, and is now spreading throughout the rest of Lain America. One of the more bizarre items on our list, Havana’s Chinatown is notable for its almost total lack of Chinese residents. Once home to the largest Chinese population in Latin America, virtually all of them fled the country after the rise of Fidel Castro and Cuban Communism (ironically after many had arrived escaping Chinese Communism). Now Havana maintains all of the usual features of an authentic Chinatown, the architecture, the food, etc., everything save actual Chinese people. Still, this does not stop Havana from proudly celebrating the anniversary of Chinese immigration to Cuba (which began in 1847) every June. London’s Chinatown was originally located in Limehouse, being best known for its slum housing and opium dens which were frequented by Chinese sailors (as well as a certain fictional detective). This original location was badly damaged during the blitz however, and with the influx of immigrants from Hong Kong after the Second World War, London’s Chinese population would end up spread further into the city, eventually ending up in its current location in the West End. Thanks to Britain’s connections to Hong Kong, this Chinatown boasts some of the finest Cantonese food in the city. The Chinese have been in Melbourne since the gold rush of the 1850’s and their numbers are continuing to swell. In the past the vast bulk of the city’s Chinese population came from the South, but in recent years the numbers of Chinese from other parts of the country, particularly the North, has started to rise, ensuring that Melbourne’s Chinatown is able to meet the demands of one of the worlds biggest foodie cities. In addition to its multitude of restaurants, the city’s Chinatown boasts an impressive Chinese Museum, which currently is home to the world’s largest Chinese Dragon, the ‘Millenium Dragon’.

China’s recent rise onto the world scene cannot be properly discussed without mentioning its relationship with Africa. China’s trade with Africa topped $160 billion last year, making it by far the biggest trading partner with the continent. Naturally this activity has resulted in an influx of Chinese hoping to make their fortunes in the continent. As has happened wherever the Chinese have traveled, Chinatowns are starting to make their usual appearances and one particular example that stands out is in Nairobi, where between Hurlingham and Kilimani a large stretch of Chinese restaurants, hotels and supermarkets are now starting to crop up.

Unlike traditional Chinatowns whose residents would be looking to fatten their purses by trading with the local population, here everything seems geared towards the local Chinese population. Barely anything is labeled in English or Kiswahili, and there are disturbing reports of local establishments turning away black, African patrons. This is especially worthy of note, as unlike in the past, these new Chinatowns are being developed by arrivals more powerful economically and politically than the local residents. Is this sort of dismissal of the locals the trend one can expect in China’s future relationship with Africa, or merely an unpleasant aberration? Only time will tell.