Throughout history - and not just in China - music has often been used as a vehicle for some political message or other. From the treachery of Renaissance royals to the Live 8/Live Earth phenomenon of recent years, music has always been a powerful tool in the spreading of ideas and beliefs. So, unsurprisingly, a country as politically volatile as China has a musical history with just as many twists and turns. 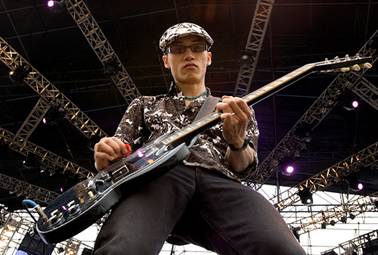 Rock music didn’t hit China until almost half a century after its beginnings in the west. What Mandarin speakers call zhongguo yaogun yinyue （中国摇滚音乐) is a relative latecomer to China’s music scene. It had its origins in the Northwest Wind movement (西北风) which was a loud, fast, heavy style of music influenced by the folk songs of northern Shaanxi Province combined with western beats. The movement began with the 1986 release of the song ‘Nothing to My Name’ (一无所有) by Beijing-based Chinese/Korean musician Cui Jian. The song became incredibly popular thanks to its catchy mix of traditional and modern styles, and its lyrics which appealed to a generation disenchanted by their government. Cui became known as the ‘Father of Chinese Rock’ for his contributions to the genre, which all began with ‘Nothing to My Name’.

The Northwest Wind style was the musical part of the Root-Seeking Movement (xun gen or 寻根), an underground cultural crusade which also included film and literature. Song lyrics had a highly political agenda, often parodying revolutionary and Communist ideals, and the whole movement romanticized the north-western peasant lifestyle.

In the final years of the 1980s, another hybrid style became popular – prison songs (囚歌 – qiu ge). The founder of this genre was ex-con Chi Zhiqiang who set his prison anecdotes to the melodies of North East China. His songs were packed full of fruity images and choice curse words, so he didn’t go down too well with the government. This led to the fledgling rock music being banned from all state-run media.

But it was in the mid 80s that Chinese rock music had its real heyday. The epicentre was Beijing, where politics were at the forefront of life. Thanks to the government ban, live music was confined to underground venues, so rock became the weapon of choice for young bohemians and politicos eager to make themselves heard. It was during these years that many of China’s most famous rock bands were created, including Infallible ( 不倒翁), and the legendary Black Panther (黑豹) whose founding member Dou Wei sits alongside Cui Jian in the pantheon of rock movers and shakers.

Young people lapped up this new style of music, especially after the events on Tian’anmen Square, in 1989. In fact, three famous bands were created that year after the incident: Breathing (Huxi – 呼吸), Cobra (Yanjingshe – 眼镜蛇) and Nineteen Eighty Nine. It was on the 17th and 18th of February 1990, that Chinese rock music began to come out of the shadows. Despite still being banned from mainstream media, rock bands got a huge concert all to themselves at the Capital Gymnasium in Beijing – the biggest ever concert of its kind in China. Bands like Tang Dynasty and Cui Jian’s group ADO performed, along with many other lesser known outfits. The premise was simple – be original. By now, rock music had become a sub-culture of its own, complete with a dress code of jeans, long hair, jewellery, and leather.

But this ‘golden age’ of Chinese rock turned out to be all too brief. As the 1990s progressed, the zeitgeist turned towards more capitalistic ideals. Making money was the driving force now, not rebelling against a government who never seemed to listen. Rock music lost its relevance. Thanks to the commercialisation of the music industry, popular hits started coming in from Hong Kong and Taiwan. Rock musicians’ refusal to bow to this commercialism effectively placed them outside of the game. A few, like Tian Zhen and Xi Wei, gave in to the influences of Cantopop and Mandopop and were able to survive as musicians, but most lost their popularity and thus their livelihood.

A punk splinter group found fame at this juncture. In 1995 an album was released called Boredom Army (无聊军队), the result of a collaboration between four young bands. This led to fame for one of the groups, Brain Failure, who ended up touring the world.

These days, Chinese rock is at the zenith of a revival that began in 2003 when Cui Jian played with the Rolling Stones. This pushed rock music back into the public’s attention, as did American film-maker Kevin Fritz’s 2007 documentary about the band Joyside’s 2004 tour of China. The film, Wasted Orient, is a somewhat bleak portrait of a band struggling to win over audiences in a country that has clearly become tired of rock.

Chinese rock music has the Beijing Midi School to thank for its ongoing popularity. When the school was set up in 1993 by Zhang Fan, it began to offer jazz and rock tutoring as well as classical and traditional training. This set modern music on a level with the old stuff, thus granting it a certain respect. The now-famous Midi Festival was begun by the school in 1999 and now attracts over 80,000 visitors per year. The Painkiller Heavy Music Magazine supports China’s rock scene, and frequently arranges for foreign bands to visit, and for local bands to travel abroad. Live music venues in all of China’s main cities regularly host rock groups, spelling a happy ending to a turbulent journey.