Aug 20, 2009 By Article and photos by Thomas A , eChinacities.com
Add your comment
Comments
Newsletter
Share this Article:

The face of Moon Hill is one of the classic images from Yangshuo. Its enormous half-moon arch and its triangular frame are all natural, but seem to bear the regularity of human architecture, at least from a distance. At the entrance to Moon Hill Park you can get a good full view of the iconic peak, as you can from the outdoor cafe to the right of the gate, and from various spots across the road. According to some, this grand archway resembles the different phases of the moon when you view it from different angles. 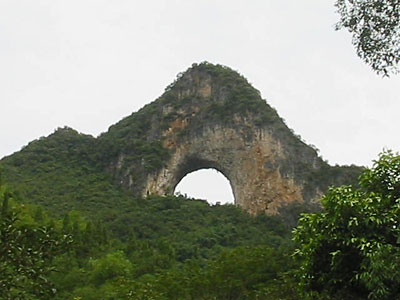 Entrance to Moon Hill Park is surprisingly modest, only 15 RMB. The lower ascent up the hill starts immediately in front of the gate. Most likely, several saleswomen will approach you even before you make it inside, and offer to help you with the trails for a small fee, or sell you drinks for as high as 10 RMB. They wander up and down the mountain as well, and are not hard to find. Although we didn't take them up on the offer of a guided tour, one of the ladies gave us some very useful advice without asking a penny for it. Eventually on your climb, you will definitely want a drink, but you can talk the ladies down on the price.

The trail, like most popular ones in the region, is made of stone steps, and starts out at a modest incline, only to increase later. It shouldn't be hard finding your way up, though when you see a split between “Vanity” on your left and “Moon Palace” on your right, take the latter to ascend to the moon arch. The leftward path will take you to a platform, with several diminutive trails branching out from there.

Although the climbing is never rigorous, the stone steps get slippery easily, and I'd advise walking with care, even where they are not steep. The full climb can be done in less than 30 minutes, and as you rise up above the last incline the moon arch will open up before you. Viewed close up, the tall, broad arch didn't seem as large to me as from a distance. The inside of the arch, formerly a cave, has an abundance of rocky protrusions, some resembling bumpy stalactites, and others running like ribbons along the inner walls. Several climbing bolts stick in the wall as this inverted climb, which was first done in 1992, is now popular with rock climbers. On the arch's ceiling you can see a few large holes. 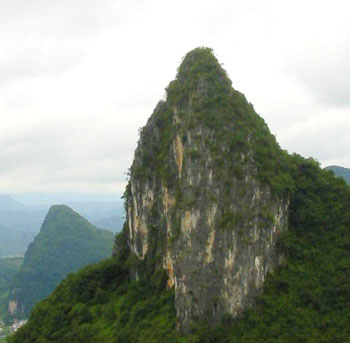 Truthfully, though the views are nice, I spent little time at the moon arch. One of the old ladies told us that there was a path in the back going all the way to the top of the frame itself, and this seemed much more interesting. Although the angle of the climb from a great distance looks difficult, once you're walking there it is actually not very steep. I'd estimate that it takes 15 minutes, longer if it's wet.

Simply go through the path to the opposite side of the arch. Ignore the first little path on the left, as it leads to the face of the rock and is used by climbers. Just beyond this, the main path splits in two, the right side going to a viewing platform, and the left side taking you all the way up. The path to the peak of the arch is mostly a narrow dirt one, with a number of rocks as well, some of which are loose. In a few places, the earth on the outer side of the path was crumbling, so we thought it better to squeeze into the inner side. Though you will walk alongside some drop-offs during your ascent, the sides are heavy with brush, and that will almost surely catch you should you slip. 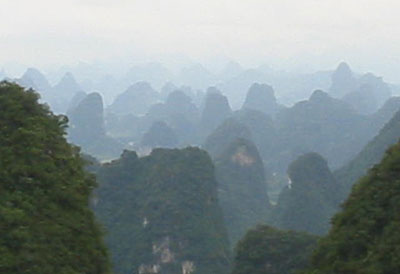 The peak of Moon Hill actually turns out to be a double peak, with one hump to your left and the other immediately to your right. The rightward peak is slightly higher. From here you should have a 360-degree view of Yangshuo and beyond, a truly breathtaking vista of miles of mountains, rivers and farmland. You can get a very clear view of the nearby towering cliffs, as well as the rows of mountains that disappear on the horizon like mist. The two peaks are fairly small rocky outcropping, but we fit five people up there, and had little trouble with space.

For the more adventurous types, it looks like the back of Moon Hill is climbable, though it’s very likely to be without a path. I was staying at a hostel just on the reverse side of the hill, and it clearly appears that you can bush-whack your way to the top, at least to the backside of the moon arch. To get to the rear, just go left out the main gate of the park for about ten minutes walking, turn left (possibly the first one) at a road with a sign for a hostel. Then keep going straight. Ignore the turnoff to the right. This should lead you to what I believe is a water treatment plant, and the base of the back of Moon Hill. You may or may not need a machete, but the going won't be easy.