There may not be a whole lot of Christ in Christmas in China but there sure are a whole lot of Christmas trees, lights, and various sparkly decorations covering the country these days. Although the government says China is only about 2% Christian (Church officials say it’s more like 4%) the holiday is becoming increasingly popular here. Chinese people love holidays and Christmas is no longer the exception. Seems like everywhere you go the sleigh bells are ringing and conical plastic trees are jutting into the air.

But what about the basic question that all these ornaments beg: “do the Chinese celebrate Christmas in China?” asks jackiechankids.com, “well, the answer to this question is both YES and NO.” But for foreigners missing home, turkey, and cranberry sauce – in that order of course – there are options and you’ll find quite a few here: Shanghai, Beijing, and, as we’ll see in a moment, there are services to attend if that’s your cup of eggnog. 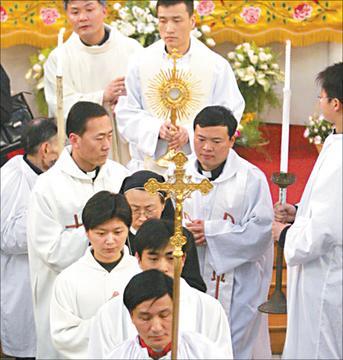 It seems the Christian missionaries who first introduced Christmas to China in the 19th century had more luck on the islands: Christmas is not a legal holiday on the mainland, although it is in Hong Kong and Macau. If your kids attend an international school they’ll have time off but everyone else is going to have to work or go to school. Western companies may well give employees the day off but if not you could always call in sick.

For those interested in prayer services here are some options for those living in Shanghai, Beijing, and Guangzhou. If you live elsewhere and are looking for services you may be able to find them listed on the internet.

Shanghai
Although Shanghai has over 90 Catholic churches the options for English language mass are few. Although you will no doubt be welcome at Chinese or Korean language services you will probably feel a bit more at home at an English mass.

International Catholic Community of Sacred Heart of Jesus Church has mass on Christmas Eve at 8:15 pm and Christmas Day at 10:30 am. You can find a map, information on the purchasing of nativity scenes, and more at their website. They also hold Chinese-language services so if you want to try out Rudolph the Red Nosed Reindeer in Mandarin you could call them and inquire as to when those services will be held. 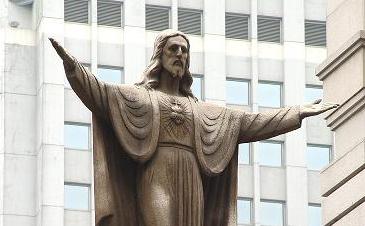 
Since St. Peter’s is closed for renovation their services have been moved to St. Francis Xavier Church. They have yet to publish their Christmas mass schedule but you should be able to find the information soon here. Not only does St. Francis Xavier Church feature masses in both English and Chinese, they also offer confession (phone ahead 30 minutes) in those languages, plus French, German, Korean, and Spanish.

Beijing
According to Frommers, none of the Catholic churches in Beijing are sanctioned by the Roman Catholic Church. That doesn’t stop new ones from springing up around the (ever-expanding) outskirts of the city and it shouldn’t keep you from enjoying Christmas at one of these wonderful churches.

If you’ve ever walked down Wangfujing you’ve seen The Eastern Cathedral, or Dong Tang, a beautiful cathedral built whose roots can be traced back to 1655 and the early waves of Jesuits. It is sometimes still called St. Joseph’s after the Bishop it was originally named for. They offer a Christmas Eve early evening mass, a ticket-only (you can get them earlier in the day, call for more details) midnight mass which is usually packed to the gills, and a Christmas Day mass. 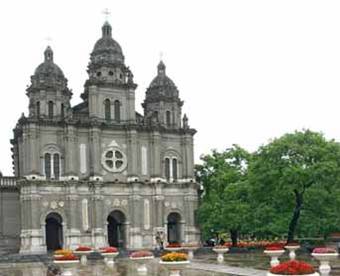 Xuanwumen Church, or Southern Church was built in the 1500s, making it the oldest Catholic Church in Beijing. It was rebuilt in the Qing dynasty and then damaged by earthquakes in 1775 and 1900. It was rebuilt in 1904 has been going strong ever since. During Christmas they have just one English mass, 10am Christmas Day, so you may want to seize that opportunity to hear mass in this gorgeous historic building.

Guangzhou
I’m afraid I’ve got bad news for those of you in Guangzhou: searching for “Christmas mass Guangzhou” only brings up links to stories about toy production. Like this one, “China prepares for X'mas with mass toys, gifts exports” from Guangdong News. Written in 2003 the article tells of the good times, “For toy and gift manufacturers in China, Santa Claus has come a little earlier this year,” it starts off, "our previous Christmas seasons began in summer and ended in September," said general manager Huang Dazhi, pointing to the busy production line in his Guangzhou-based Jetta China Industries Co. Ltd, one of the world's largest toy producers.” This year’s economy has taken its toll on the Guangzhou Christmas industry. Statements like this one, “our orders from the United States kept pouring in from late November this year," have been replaced by, “A Blue Christmas at China’s North Pole,” a grim Time magazine story about factory closings.

But whatever the weather outside, this time of year it’s always warm in our hearts. We may not be able to find the right kind of cranberry sauce or even an oven to roast a turkey in, but we can find gratefulness in our hearts. For our friends and family here and abroad; and for being fortunate enough to be in China during this exciting time, able to make new friends, eat new things, and enjoy mass in a church rebuilt by a Qing emperor.