Regular eChinacities readers will already have picked up on my interest - some might go so far as to say unhealthy interest or even addiction - to coffee. I’ve written recently about Nescafe, and the cheap and good ground Yunnan coffee available around China for just 20-30 kuai per bag. But sometimes you don’t have time to make coffee. Or you run out. Or you find yourself desperately needing a pick me up to keep you awake during hours of monotonous Chinese classes, or at the office. Fortunately, I think, more and more Chinese supermarkets and corner stores are carrying “coffee flavored” beverages for those emergencies when real coffee and/or meth can’t be found. 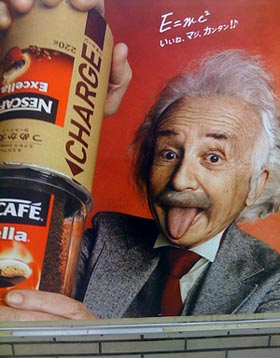 In line with our mission to bring the China related facts to the folk, eChinacities engaged in a rigorous taste test of five of these coffee flavored beverages purchased at one of the six 7-11s within 5 minutes walk of the office. The contenders were:

The taste test left me feeling kind of nauseous, but I will persevere through my discomfort to bring you the results of our exhaustive culinary/scientific analysis.

Suntory Caffe Latte
Have you ever wondered what Saran wrap would taste like if it were in liquid form and flavored with synthetic butterscotch? Well, fortunately for you the years of uncertainty are over, all you need to do is buy the Suntory Caffe Latte to find out. It’s like you’re drinking the label itself and not the two-tone cofee image that’s printed on the label. It’s been pointed out to us that the Suntory “coffee” beverage is the most popular of the canned coffees in China. This seems to be true, but it does not make it good. Britney Spears is also very popular and she’s far less plastic than the Suntory Caffe Latte. 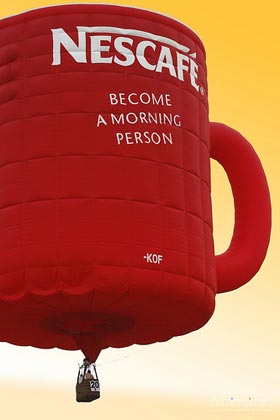 Kirin Fire Café Latte
Another Japanese coffee, one of the best things about the Kirin Fire Café Latte does not make me want to vomit. It’s the color of dirty dishwater but has a slight Kahlua-esque flavor to it. Mercifully, the aftertaste is pretty much the same as the beforetaste and neither of them taste as much like industrial by-products as the Suntory drinks. If you’ve ever had a White Russian mixed for a 12 year old a shot of vegetable oil as a chaser, then you’ve basically experienced the Kirin Caffe Latte. Coffee extract shows up 5th on the ingredients list, coffee crystals straggles in at number 7. 4th and 6th place are occupied by whole fat milk powder and skim milk powder, respectively.

Suntory Coffee & Milk Tea
Imagine the combination of coffee and milk tea. Apparently a Hong Kong specialty, the Suntory Coffee and Milk Tea may be one drink with two flavors but neither of them are particularly appealing. Most off-putting is the smell hovering about the beverage the way an oil spill floats on the sea. Also like an oil spill, ducks are involved. Apparently the Chinese name – which sensibly doesn’t explicitly include the words coffee – apparently refers to Mandarin ducks who, as we all know, mate for life. In this prolonged metaphor, the two ducks are coffee and milk tea and have a racy interspecies marriage going on. Despite the poetic lilt, it’s high time these ducks divorced. Coffee and tea should be kept separate and never drank with Equal. It’s unnecessary, and in the case of the Suntory Coffee & Milk Tea, unusual and cruel.

Nescafe in a can
Unlike the previously mentioned beverages, Nescafe seems to have coffee in it. Surely the chills and shakes it gives you soon after consumption cannot solely be attributed to the near lethal sugar content. Warning: if you are even in danger of becoming diabetic you’ll want to steer clear of all these beverages. The other advantage to canned Nescafe – and I’m talking the OG here, not the newer much weaker “Bold” flavor – is that the can is small. This may seem counterintuitive, but when you buy a bottle of Suntory Café Latte and feel desperate enough to choke down the whole thing, you start to feel like the kind of wino so desperate that they filch the not quite finished drinks off other people’s tables before the waiter can clear them away. Nescafe gets out of the can and into you bloodstream with a quickness. 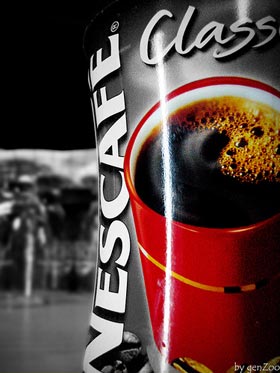 A-Ha boxed coffee
Known in China as ‘Ya-ha’. Don’t know if the Chinese is warning you it’s a bad joke on your teeth or what, but the A-ha boxed coffee is like the baseball bat bartenders keep behind the bar – efficient, reliable, brutal. People who’ve poisoned themselves but don’t need their stomachs pumped are sometimes made to drink liquid charcoal in the emergency room. Often, chocolate milk is provided to help you choke down the charcoal. Helpfully, A-ha has done us the service of combining the two ingredients into one little box. It sure ain’t pretty, but it works.

There are other bottled, canned, and boxed coffee flavored beverages out there – none of which resemble the taste of coffee by any stretch of the imagination – but there’s also a cheaper, more portable solution. Just carry around a bag of instant coffee – choose with milk and sugar or without – and in a pinch, just work up some saliva and pop a teaspoon or so into your mouth. If necessary add water. You could also combine swig some coffee flavored beverage, thus finally making the coffee flavor bit a little more accurate.

Sure it would be better if we weren’t addicted, and didn’t have to lower ourselves to things like Suntory Caffe Latte to be able to do a passable impression of a normal human being, but until you kick the habit, hopefully this will help ease your pain and keep you awake and functional, albeit maybe a little queasy. Try not to drink too much on an empty stomach, or a full one for that matter.