Chinese bakeries are wondrous but confusing places. The intoxicating buttery smell draws you inside, only to be faced with stacks of buns that look more or less the same. In this guide to Chinese baked goods, we’ll introduce you to the best of the bunch. Roast Pork Buns are the perfect representation of the sweet-savory flavor profile that’s so popular in China. Those used to their meat products being savory might find this one a little jarring at first, but once you’ve acquired a taste for it you’ll be addicted for life.

Roast Pork Buns often give themselves away in a Chinese bakery. The fluffy steamed buns tend to be loosely folded at the top, allowing an eagle-eyed customer to spot the brown gooey goodness within. However, there is a baked variety which comes as a smooth, golden-brown bun with a sugar glaze on top. In both, the barbecue pork is finely chopped and mixed with sugar, soy sauce, hoisin and oyster sauce. Pork buns should be devoured warm whenever possible. If you like custard doughnuts and molten chocolate cake, chances are you’re going to be nuts about Salted Egg Yolk Buns. There’s still a touch of the salty-sweet thing going on here, but it’s definitely more on the sweet side. Egg yolk is mixed with sugar, salt and ussualy condensed milk or coconut milk for the filling.

These little babies normally come in the form of completely unmarked baked buns, just to make them all the more difficult to find. You’ll only know you’ve got one for sure when you bite through this slight crispy outer layer to a reveal rich molten center of eggy delight with an every so slightly gritty texture. 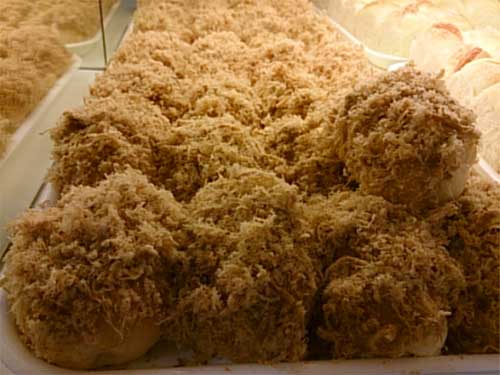 One of the most alarming looking and sounding items in a Chinese bakery is the Pork Floss Bun. It basically looks like a bread roll topped with meat cotton candy. And that’s pretty much what it is. Surprisingly, however, the end result is quite nice.

Although variations abound, the typical Pork Floss Bun is a slightly sweet white bread roll topped with a sticky glaze and clumps of fluffy pork jerky that dissolve on the tongue. It’s pretty clear you’re not going to lose any weight eating these bad boys, but you’ve got no business being in a Chinese bakery at all if that’s you aim. 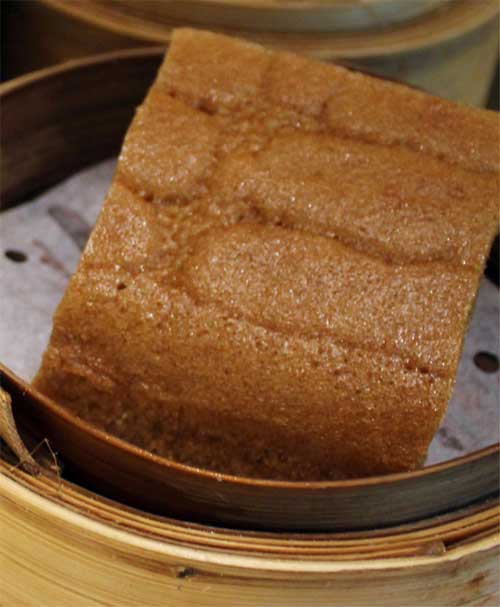 Literally translating to “Chicken Egg Cake”, Jī dàngāo is a dim sum favorite that’s available in many bakeries across China. This steamed cake is a contradiction in terms. While being light and moist, it’s dense enough to hold its shape when cut into big chunks and substantial enough to serve as a decent snack at any time of the day. And while it's definitely not savory, it’s also by no means as sweet as a sponge cake of Western variety.

This cake most typically looks like ginger sponge and is sometimes presented in individual paper cases. It’s traditionally made only with eggs, flour, and sugar. Sesame balls are pretty easy to get wrong, but when they’re right, they’re oh so right. These cute, perfectly round pasties are made from crispy, chewy glutinous rice flour and filled with lotus paste, black bean paste or red bean paste. They’re then covered in sesame seeds, in case you were wondering where they came in.

Although wonderfully satisfying,Sesame Balls are lighter than you might expect, as between the shell the the filling is a large hallow caused by the expansion of the dough. These are best served straight from the fryer from whence they came, so grab them first thing in the morning if you’re up and feeling snackish. Although translated into English as “Wife Cake” or “Sweetheart Cake”, Lǎopó bǐng technically means “Old Lady Cake”. Just like in the West, the term “old lady” is often used in China to refer to a wife.

Wife Cakes are more or less always found in Chinese bakeries. Again, they’re in between the realms of sweet and savory, but most firmly embedded in the universe of chewy. The round and flat, flaky pastry is usually filled with a thin layer of winter melon, almond paste and sesame, which together have a texture similar to sticky rice but a taste like pumpkin or squash. Mochi originated in Japan but are prevalent in bakeries all over China.The soft, smooth balls of sticky rice dough come filled with a whole range of flavors, from green tea to mango, sesame and red bean. They’re usually rolled in crushed peanuts or grated coconut. Mochi are sweet, satisfying and the perfect accompaniment to a refreshing cup of Chinese tea.

Chinese bakery? Um, no thanks. Pork floss cake is probably the most disgusting thing I've tried.

I dont think mochi is originated from japan. anyways... nice article about some of the common goodies you can find in the bakery. Personally, i find the bread in china are all too sweet for my liking.