Having a Baby in Nanjing

I got a call from my doctor last Thursday.

"Long Nose King" was the nickname she gave our unborn son. (Yes, they told us it would be a boy.) I had the sick sense that she was trying to convince me to allow her to induce the delivery, even though she told us at a previous appointment that his due date was not for another week and a half. 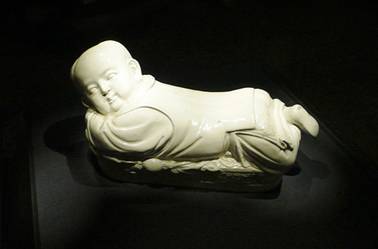 "Doctor, do you mean you want to induce?" I asked.

"Induce. Do you want to induce tomorrow?"

"No. Tomorrow the baby will come."

This, by the way, was how our communication throughout the entire pregnancy had gone so far. A game of nouns and half said Chinglish words until one of us knows what the other one is kind of talking about.

"So, you know the baby will come tomorrow? How do you know that?" I asked.

"No, we will have an induction."

"Oh, we’re not going to induce. But we’re going to have an induction. Okay."

After a few conversations between my doctor and my interpreter, and my interpreter and me, we decided it was a good idea to have the induction. The doctor had convinced us that because this was my second child, and my baby was "tall" he would come fast. And she didn’t want the baby to come in a taxi on our way to the hospital. She also didn’t want to work over the weekend, in case the Long Nose King decided to make his debut then.

So the next day, I packed my bags and headed off to the new and luxurious HS Woman’s Hospital that just opened in Nanjing. They offer VIP packages for a whole range of women’s services, including deliveries. They also practice Western medicine, which is why we chose to stay in Nanjing, over venturing to the more expensive and far away hospitals in Shanghai. In fact, by staying in Nanjing, we were able to deliver our child in care similar to that of the international hospitals for the astoundingly cheap cost of 6,000 RMB, and we didn’t have to travel far from our home.

The Delivery
When I first arrived at the hospital in the morning, they wanted to do several tests, including an hour-long ultrasound to make sure there weren’t any last minute complications. We also had to pay all medical fees up front, and fill out several forms before the delivery. This whole process took several hours.

At around 3:00 PM, my doctor and a swarm of nurses wearing pink entered my room.

"It is time for baby to be born!" my doctor announced. And with that, we were lead by the pink patrol (as I later dubbed the nurses) into the delivery room. To me, a delivery room was something that my mother and grandmother talked about when they were having babies decades ago. In the U.S., more and more hospitals are opting to have mothers give birth in their own hospital rooms, where they stay for the delivery and recovery.

As we were entering the delivery room, we noticed that the doctor was shoeing away my husband. Through my interpreter, we discovered that although the doctor had promised us that husbands could be in the delivery room, he now could not come unless we wanted to pay an extra fee, known as the "extra person fee." (I’m pretty sure that was a lie. They’re usually really good about telling us about fees. I think she just didn’t want to deal with him.)

So off I went, alone in a strange world to give birth, while my husband went to take a nap.

Actually, I wasn’t totally alone. There were several nurses who were all very kind and experienced. Just like my experience in the United States, these delivery nurses were the ones who would help me the most during this time.

The delivery room itself was clean, inviting and sterile, with older equipment. It was as if the hospital had taken extra effort to order new machines, just not the new models.

The nurses led me to my bed, and hooked me to a machine to measure my and my baby’s heartbeat. I lay reading while the nurses all stood over me commenting.

"She’s so white, so pretty," they would say, usually poking my skin somewhere. It was nice to hear. In America, my nurses also said the same thing, but in a not so complimentary tone.

The Chinese nurses would also feel my stomach for contractions and help massage them away. Sometimes the machine that monitored my baby’s heart and mine would occasionally get off beat. The nurses would then give it a good whap, or restart it. (Maybe they weren’t the newest machines after all.)
Something that made me laugh was that they also had bedpans, which I was scolded for refusing to use.

"You MUST use this," my doctor said to me in a very serious tone, as she held a plastic bedpan over my head, while I giggled. She had caught me, up and around, using the bathroom like I was perfectly capable of. "No get up! No get up!" she insisted.

"Okay, I no get up," I said, still giggling at the thought of it. I also continued to get up from time to time, just not when she was looking.

As the delivery progressed, the pain became more than I wanted to deal with, and I asked for an epidural, one of the marvelous advances in modern medicine. In the United States, my epidural made my first delivery almost painless, so I was relieved when the anesthesiologist entered the room. Not so when she had me lay on my side, and five nurses held me down.

"No moving! No moving!" one of the nurses whispered to me.

Well, after 3 stabs to my spine with a long needle, I can say I did not voluntarily move, although I screamed and my legs did jerk uncontrollably. I guess that’s how it goes when you allow someone to play Pinocchio with your spinal cord. (Although my epidural in the U.S. went smoothly, I cannot blame the fact that this one went bad solely because it was in China. I know many American women who say that even in the U.S., and with well trained anesthesiologists, their epidurals still went very wrong.)

Also, my doctor believed that epidurals stopped the body from having contractions and would ultimately stop the birth. So she prescribed only a very, very small dose of anesthetic, which did almost nothing.

She rolled her eyes at my pathetic American inability to take pain. She then asked the anesthesiologist to increase the pain killers going into my spine.

I finally felt a nice numbing feeling – on the side of my face, and in my feet. How the drugs missed everything in between, I will never know.

So there I lay, dealing with the pain that nature intended for women, and the annoyance of paying for an anesthetic that didn’t work. My feet felt great though.

Just then the doctor said it was time to push.

And she was right, we soon did have victory. Within minutes I was holding the Long Nose King, a healthy redheaded baby boy.

Birth defects show human price of coal
I Want To Raise My Family in China – Am I Crazy?

We've just launched a brand new Answers section which allows users to ask or answer other people's questions. To increase your chances of getting a fast and satisfactory reply (and to start accumulating points for great prizes) please ask your question here: