In my article on jobs that go "beyond the blackboard", I began to broach the subject of westerners finding jobs outside the realm of English teaching. This time, I dig a little deeper into the options out there. I will focus on what they are, how to find them and what they pay. The list is by no means categoric – China is too large and diverse to be able to do that in the confines of one article – but it offers some typical examples of employment on offer. 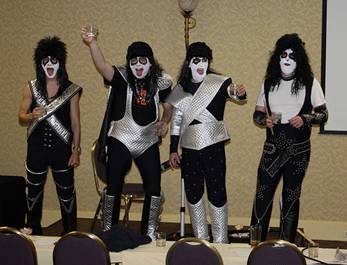 Music Industry
The entertainment industry is one of the fastest growing fields in China. Just a few years ago, this was confined to the bigger, more developed cities. Now, though, second tier cities are getting in on the act as well, creating many more opportunities for the musically inclined. Like most fields, finding jobs in the music industry depends on experience. Singers and DJs with performance experience in their own countries can expect greater salaries and opportunities to travel than those looking to make their breakthrough in China. For example, a DJ with the right credentials can earn in the thousands or even tens of thousands of RMB over a weekend. Others, who could best be described as "enthusiastic amateurs" may take home a few hundred for the same period.

Finding musical work is not as logical or structured a process as other more 'professional' fields. At the lower end of the scale, musicians can answer ads in the classified section of local expat magazines or take fliers from expat bars. There are also ads placed on expat recruitment sites. There is also the option of direct contact with clubs and bars – old-fashioned door knocking. At the higher end of the scale, recruitment is based more on experience, so jobs are hard to find so casually. Instead, performers may use agents or contact venues personally. Visas are not common benefits in most musical jobs. The only ones on offer tend to be for resident bands or DJs working at one particular venue for 6 months or a year.

Modeling & Acting
Just like the music industry, much of the modeling and acting work on offer is also of a very casual nature. Jobs tend to be for a day, afternoon or evening at a time, and are usually paid in cash. Also, just as with music, much depends on experience and reputation. Background in the west and an established reputation will secure a much higher salary and may provide a visa - although, this is usually only for long-term roles. Jobs can easily be found on expat websites and, occasionally, in bars. However, finding them directly is more difficult than for musicians. Pay varies, with first-timers and novices able to expect a few hundred RMB for the day. Those with experience could expect to earn in the thousands. Scouts often roam areas with lots of foreigners, especially universities, looking for models or voice actors and these initial contacts can sometimes develop into longer term relationships.

However, in these two fields there are obvious constraints beyond the obvious metrics of ability and nationality. The first, obviously, is physical. For models, many employers will have strict requirements on appearance, such as height, weight and facial characteristics. For actors, the need to speak Chinese is also high as many roles would be primarily in local language.

Management Roles
As I mentioned in my last article, management roles at major companies tend to be filled in the west by the organization's head office. However, for many smaller companies, this is not always the case. With the financial crisis restricting recruitment budgets, many companies are beginning to look to expats already living in China. They are doing this as a way of saving money and maintaining performance. By hiring in China, they save money on relocation expenses and the cost of the dip in performance that could be caused by hiring someone who needs to acclimatise to China and the way of doing business in the Middle Kingdom.

Jobs like this tend to focus on areas such as sales, marketing and production. Compared to the options above, they offer far more permanence. For example, they will be full-time employment and will come with full visa support and substantial salaries. The pay varies, but 20,000 RMB and above is a decent benchmark. Locating such jobs is relatively straightforward. They are often advertized on expat and recruitment focused websites and magazines, or can even simply be found through networking. However, they are not quite so easy to actually acquire. They require experience, qualifications and often, Mandarin skills.

Language Teaching...But Not English
Whilst the jobs listed above are usually open to expats of all nationalities, and, teaching is most commonly aimed at English native speakers, this one is aimed at specific nationalities. With companies and students from across the globe coming to China in ever increasing numbers and Chinese business people and students making the journey in the opposite direction, there is a growing demand for language skills. Obviously, by far the biggest slice of this market goes to English. However, with expats of many different nationalities working here in China and Chinese companies doing business with companies across the globe, English is not always the language of choice. Chinese staff often need slightly more diverse language training and not all students looking to study abroad wish to head to the English speaking world.

Because demand is much lower than that for English, the opportunities are much more limited. There may be a few full time jobs for native speakers of Russian, Spanish or German, but most of the work is more likely to be on a freelance or part-time basis. The plus side of this is that hourly rates can be high. Because of the limited opportunities, this type of job is not always the easiest to find. Ads can be scarce. For businesses seeking tutors, some ads can be found on expat and recruitment websites. However, many foreigners looking for this type of work tend to advertise themselves using either websites, or notice boards in bars or coffee shops, especially those located in the vicinity of universities.

While teaching jobs can be easy to secure, and often quite lucrative, there are many other jobs out there for those with the persistence to find them.

How can you get aresident permit as a dj?? Sure the gigs are out there if you have the skills, but im pretty sure you would have to leave every 2 months or whatever your visa states.. mostlikely why most find teaching jobs... so they can get the resident permit.

In spite of having good English language command and professional abilities and certification in English language teaching, Indians are at a big disadvantage because of the nativity clause that China is insisting to have other Native speakers take advantage of the situation. This is a concern that I suggest to look at and reward the able not based on the nativity but based on the skills and delivery.

wow guys look at the bigger picture and stop arguing atleast they are heading towards a right direction,kudos guys

Hey I graduate next year and I really want to work in the Chinese music industry ! Does anyone know of any labels? bars? looking for event managers or tour organizers ??

If the company would post their jobs by their own, it would be a greater chance to get a job here ! But most of companies send their offers to agents , so your CV , instead to arrive directly in the hand of a HR staff from the company in need of you, it will arrive in the hand of an agent who may be not so well trained or having not so much experience in recruiting or simple, if he no likes your face or CV, your CV will arrive no where !