Stories in the western media about China are growing increasingly common. From the Olympics to the recent riots in Xinjiang, reporting on China is becoming a fixture of many western media outlets. In China, the western dmedia is often reviled, and groups like anti-CNN sprung up around perceived offenses perpetrated by western journalists and pundits – it’s possible that the ratio of pundits to actual journalists in the western media exacerbate this; and the distinction between reportage and opinion is often unclear. The coverage of the Urumqi incident was filled with inaccuracies and assumptions: news outlets in the west initially reported the dead were mostly Uighurs; an op-ed by president of the Uyghur American Association Rebiyah Kadeer appeared in the Washington Post, and she appeared on TV with a picture of a riot that actually had taken place in Shishou weeks before. During protests in Tibet last year, CNN showed a cropped picture that cut out Tibetans throwing stones at police vehicles (below). Yet, many are still frustrated by the Chinese state-run media and crave an alternative to what critics see as a monolithic propaganda machine. We asked you…

What do you think of the western media's coverage of China? 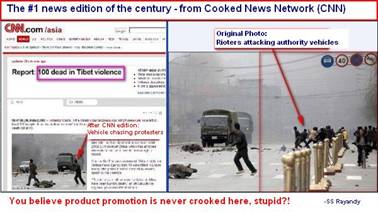 Perspectives seeks to promote dialogue and cross-cultural understanding by featuring Chinese and foreign responses to a single question. Email us to be added to our weekly question mailing list or to suggest questions of your own and feel free to add your perspective in the comments section below.

I generally choose to read western media (and Al Jazeera) because even if there might be some spin or bias, news from a corporation will never be as biased as news from state-run media, particularly when it comes to politically relevant information. Basically, the Chinese state-run news is equivalent to Fox News during the Bush administration.
J / US

I think the foreign media’s coverage of China has some prejudice and doesn’t tell the whole story. I’ll give you two very basic examples: a colleague of mine went to Canada, her Canadian neighbors asked her if Chinese had TVs or not? One of my students, before he came to China, was advised by his friends not to come, they said Chinese people all wore green clothing and upon seeing people would knife them. So, the foreign media’s reports on China are really very few, but not comprehensive and full of prejudice. However, it may be a long time before this changes; there are a lot of Chinese, there are a lot of Chinese that go abroad, Chinese people are smart, hard working, and make a lot of money – it’s natural that in the course of things they will encounter exclusion. You cannot deny, that in many places the quality of Chinese people is not high, the impression they give the foreign media is not good; however, perhaps the foreign media has very few people who portray Beijing and Shanghai’s beautiful sides. I’m honestly not sure as to what causes this psychology – ideology? Fear of China’s rise? I don’t get involved much in politics so I don’t know abut this. But I’m pleased that more and more foreign students are personally coming to China and seeing what China is really like.
L / China 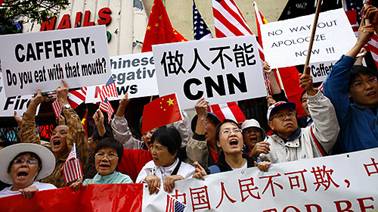 Western media is predominantly private and for profit, Coverage caters to the audience. This is marketing 101. News agencies need money; they provide a product. Since most westerners disapprove of the communist monopoly on media within China, there tends to be more negative coverage of China to serve the market. This is not the result of an anti-China bias per se; it is the predictable market response to a lack of supply. China imprisons journalists and uses its monopoly on state media to

propagandize a one party agenda. That is their sovereign right. However, there is a market for information beyond the artificial harmonious veneer of CCTV and the CCP. Western media serves that market. If the CCP opened up the market for critical journalism within China, the western market for negative coverage would diminish. Instead, western media is being used as a scapegoat. With regard to the west, the Party appears completely ignorant of the fact that they are the victims of a market dynamic they have constructed. In addition, the facade of propping up party loyalists as "independent" journalists hired to glorify the Party has created a sort of schadenfreude that will sell, sell, sell.

Clearly China has mastered market dynamics in trade. The failure to translate that knowledge into the market dynamics of media could easily be written off as ignorant, inept or obstinate. However, such an analysis ignores the business model of media within China. Chinese media only serves a local market and since it is a monopoly and has a captive audience, of course it has been highly successful. Unlike western media, the motive is not about controlling market share, it is about controlling people and thought. Through their own monopoly they create a supply and demand on thought and issues which has been highly effective in manipulating the market of ideas within the country. This is one of the few markets where the Party has had immense success in promoting local consumption. If you supplant profit and market motives with power and thought motives, it is clear that they have applied market dynamics very ingeniously to the media. And with western media as a running blank check scapegoat, I would not expect a change of policy in our generation.
Newsletter

LIES for the most part!! Created by reporters whose granny's first cousin once removed heard from his uncle etc, etc! Send them on a backpackers tour instead of staying at the Hilton, then they can live the life of the average Chinese person. Ask the people if they are oppressed and watch the smiles. An enormous country with an enormous population, enormous numbers of ethnic groups, and a history of the warring chiefs and violenc NEEDS a hand of steel to keep the country together and progress. Rome wasn't built in a day. The family unit is their strength..."Together we stand, divided as in the "Democratic west" we (they) fall. Come and report China as it really is! I’m just back from a six week backpack tour (I'm 76 and I've seen a lot in my life). Lived thro' one war and the Blitz in London and participated in the Canal Zone war 1952-1954.
B / Newsletter

It's difficult for me to answer this question without reference to China's portrayal of 'western' media coverage, in which nuance and balance take a back seat to nationalistic party rhetoric. Overall, 'western' media offer a fair assessment of China's good and bad points. The supposed 'negative' bias exists only in the minds of a people for whom any criticism is anathema.
S / UK

China launches new English-language newspaper
A Foreigner asks why we hate CNN
China to broadcast in English in European supermarkets
Can Foreigners Ever Understand China?