Chinese Medicine: A Change of Heart 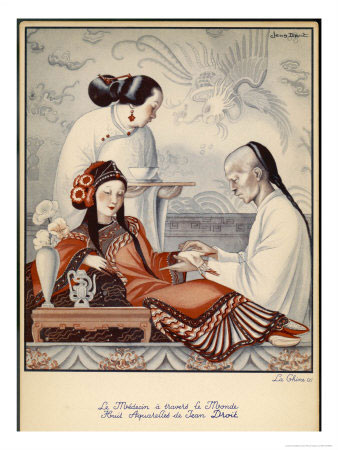 We don't just need health care reform. We need a whole new way of looking at health. The medical industry gives lip-service to the idea that positive emotions help healing and negativity slows it. But we're still too arrogantly materialistic to accept the larger truth: spirit determines matter. The thought creates the word creates the feeling creates the physical result.

This truth is at the center of any major religion not founded by a science fiction writer. And although a Nazarene called Yeshua told us it is what comes out, rather than what goes into our mouths that defiles us, most of us today need distinguished looking gents in white lab-coats to tell us it is so. They haven't yet, but the fact that Chinese doctors did thousands of years ago certainly adds an interesting case of corollary evidence.

Thus the curious concept of the superior physician in ancient Chinese times, one who kept you from getting sick in the first place. "The superior physician makes it his prerogative to treat disease when it has not yet manifested, and prevents having to treat disorders that have already progressed to the realm of the physical." By contrast, "the low level physician finds himself salvaging what has already manifested in physical form, and treating what is already ruined." So even if those healers of days long gone by didn't have a cure for cancer (we don't either, come to think of it), they used all their art to make sure you didn't get it in the first place.

Much of that art, for a superior Chinese physician, mind you, involved a finely cultivated intuition, an ability to tune into a patient's shen, requiring a level of sensitivity and concentration not to be found in any western health care center today. It also required a systematic interpretation of the ways in which feelings affected flesh. By 1174, physician Chen Yan had traced all disease down to three prime causes. It could come from injuries to the body that weakened the qi - a wolf bite, say. Disease also arrives with the six different weather influences, which can invade the body's subtle channels and settle in the organs. Finally, there are the five emotions, which coalesce in the organs and can turn pathological, causing everything from migraines to athlete's foot.

Hard to swallow, sure, but not all who pad around that grungy locker room get itchy toes, do they? To the Chinese, at least etymologically, the concept has credence. Their word for sickness is bing, which in its most literal interpretation means "affliction of the heart". The belief that physical illness has mental, emotional, and spiritual causes is part of China's intellectual legacy.

Little surprise that this legacy, along with much other traditional Chinese medicine, got tossed on the trash heap by the enlightened proponents of Marxist materialist science. But spirit-first approach had already served well in fairly materialistic Chinese society. Royal Qing dynasty doctors conceded that, although their patients suffered little risk of wolf attack or getting caught in a blizzard, the potential damage of unbalanced emotions was more considerable than ever. Court physician Miu Xiyong wrote in 1625, "In very ancient antiquity, human illness was primarily caused by the six excessive weather patterns rather than the emotions. Today, the situation is quite different-emotional influences are severe and the five desires run deep."

The five desires. All spring from the heart, the heart that keeps man in eternal struggle between the base drives of his animal body and the celestial virtue he aspires to in his better moments. In exploring this paradoxically, utterly human condition, the ancients determined that man's number was five. Therefore, his spirit suffered from the five desires, and expressed itself in the five sentiments (wuzhi) and five natures (wuxing).

These sentiments are vigor, which relates to the wood organ, the liver. Ecstasy comes directly from the heart, the fire organ. Contemplation, from the spleen, the earth organ. Nostalgia is associated with the metal organs, the lungs, and awe with the water organs, the kidneys. When all of these sentiments work harmoniously, one is invulnerable to illness. For all but living Buddhas, sadly, selfish attachments inevitably cause an imbalance and throw the whole mini-cosmos out of whack. Vigor turns to anger, ecstasy to hysteria, contemplation into worry, nostalgia into grief, and awe into fear.

The five natures, or five constants, as they were alternatively known, have their seat in the same organs. Compassion arises in the liver, propriety in the heart, integrity in the spleen, selflessness in the lungs, and wisdom in the kidneys. These five natures are gifts from heaven, while the emotions are their secondary functions. The five natures, therefore, are under constant threat from the emotions, which throw them out of balance, to the detriment of both the body and society.

So it seems the Chinese were ready for the 301 course in Buddhism when it arrived in China. After all, before Bodhidharma had made it over the Himalayas, a disciple of Laozi had opined, "When humans rid themselves of emotions and desires, moderate the sensual temptations of the material world, and purify the five organ functions, then the light of spirit will fill them." And the early medical treatise Comprehensive Debates in White Tiger Hall claims that "Emotion is that which is meant to keep quiet, while nature is that which is meant to be active and unfold."

How do these five emotions give us so much trouble? Why through the five senses of course, which allow us to indulge in the illusion of sense pleasure and pain. 3rd century BCE Master Lu put it this way, "Heaven created the human being and endowed humans with lust and desire. Desire is associated with emotion, and emotion is associated with moderation. The sage cultivates emotional moderation in order to control the desires, and never allows the emotions to run his actions in life. The ears' desire for the five sounds, the eyes' desire for the five colors, the mouth's desire for the five flavors, that is emotion. The difference of being in command and losing command over the emotions is the root of life and death, and the starting point of living and dying."

Devoted to the concept of emotional imbalance as the prime cause of illness, 18th century physician Xu Dachun developed a dynamic, "fight fire with fire" psychological strategy to treat the emotionally debilitated, one that must have seemed extraordinary in its application:

"If the five sentiments have been strongly injured, this condition cannot be treated with herbs, but should be addressed via the controlling relationship cycle. Grief controls anger, use it to touch an angry person with tales of misery and dejection; excitement controls grief, use it to thrill a sad person by inundating him with waves of sarcasm and degrading language; fear can control excitement, use it to intimidate a maniacal person with threats of death and imminent disaster; anger can control worry, use it o trigger a depressed person with foul and shameful language; worry can control fear, use it to approach a panicky person with depressing news of potential loss."

As fun as it may have been to lambast a depressed person with "foul and shameful language", other doctors believed in channeling strong feelings, using the concept of jie: harmony, moderation, and rhythm. Jie is best achieved through ritual, such as funeral ceremonies to express mourning, the marriage ritual to channel lust, etc. Even today, some therapists in Northeast China use Confucian teachings of ritual and social order as their primary treatment tool. Relying on storytelling and ritual affirmation, these healers are living exemplars of the principle that most disease originates from the degradation of human nature by the forces of unbalanced emotion.

Their practice is rooted in the example set by one Wang Fengyi, a Confucian educator and charismatic emotional healer who traveled the Northeast during the early 20th century. A poor and illiterate peasant, he claimed to have realized the nature of human emotions and their disease-causing consequences during a three-year vigil over his father's grave. He concluded that emotions are stirred up through social interaction, especially that within the family. Inspired, he began traveling from village to village, spreading neo-Confucian spirituality, giving ad hoc seminars which became legendary for the number of listeners who would cry, faint, or vomit after triggered into cognizance of their emotional hindrances by Master Wang.

The therapists who follow his tradition use essentially the same method he pioneered. Patients are asked to tell their life stories, and then are diagnosed with a specific lack of virtue caused by one of the five emotional poisons: anger, hate, blame, judgment, or disdain. While Wang reputedly had a clairvoyant ability to see into his patients' hearts, he left behind detailed writings on how various afflictions related to specific emotions.

So even today it is possible to find villages in northeastern China where simple dwellings have been converted to makeshift psychological clinics, where the ill come and receive shelter, food, and treatment, either for free or for a nominal contribution, dependent on the patient's finances. Their therapists have spent at least twenty years clearing their own emotional issues.

After diagnosis, the treatment consists of all-night story-telling sessions. The therapist weaves a narrative from China's rich moral history, but will typically involve the patient's daily environment, including vivid tales of others who have been cured this way, ideally people in the very room who can give moving testimony. The process is known as "removing disease through an appeal to one's higher nature". The cure has begun when the patient is compelled to recognize his own emotional involvement in the forming of his disease, and commits to personal transformation. At this point, skilled therapists are able to trigger a catharsis that manifests in uncontrolled sobbing, profuse sweating, vomiting, diarrhea, and other proof of cleansing.

All hard to believe for those not present, perhaps, but not as hard to believe as the proposition that one's spiritual condition has no bearing on his physical constitution. And as Confucius himself once admonished, "He who can reanimate the Old to gain knowledge of the New is fit to be a teacher." Take that to heart.