A Guide to China’s Alcohol Culture and Drinking Etiquette Throughout history and all over the world, alcohol consumption and the correlating culture surrounding it have been clear societal indicators. China is naturally no different. Here’s our guide to the norms and rules of Chinese drinking culture. 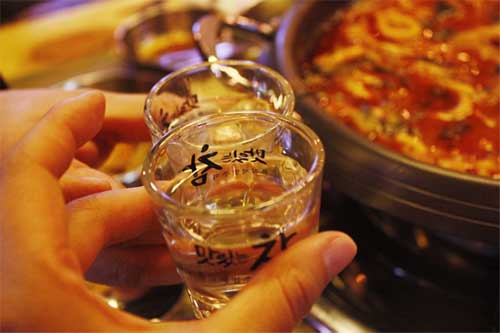 The Overview
For an outsider, the drinking culture in China might seem to border on childish high-school behavior. Grown men will happily compete against each other when drinking, and whoever gets wasted first will be the loser, much to the amusement of the spectators and opponents. If you’ve spent any time in China, you’ve probably had the pleasure of seeing groups of men carry a passed-out friend on a Friday night. Or any night of the week for that matter. You’re also likely to see a fair amount of vomit scattered around popular drinking areas.

The Preparation
Should you ever happen to find yourself in a moderately important event where alcohol is part of the equation, be sure to carb up before. You will be challenged, you will be persuaded, you will be tricked, all in order to drink more. This is not necessarily related to whether you're a foreigner or not; gender, national pride, provincial pride, color-of-your-shoelaces-pride, anything can be used as an excuse to compete. So ready the pain killers and electrolyte tablets for the next day because it's about to get messy.

The Weapons
At almost any Chinese banquet you’re sure to encounter "白酒" (báijiǔ), which literally translates to “white alcohol”. This is traditional (and very strong) Chinese liquor, usually around the 50% alcohol content mark. Best described as vodka with Chinese characteristics, báijiǔ can be one of the tastiest alcohol types you'll ever try, such as "茅台酒" (máotái jiǔ), which is used for state dinners, or the worst, such as "二锅头" (èrguōtóu), which is predominately used by masochists. Alongside báijiǔ, you'll probably find less strong beverages as well, most likely beer or bottled cocktails such as Rio.

The Quantities
Generally speaking in China, the more you can drink, the more respect you will earn. If you can drink excessive amounts of alcohol, still stand up, form relatively coherent sentences and follow proper Chinese drinking etiquette (see below), you’ll no doubt impress your table-mates and leave a good impression. If you fail, don’t worry! You probably won’t remember it anyway. Obviously never drink more than you can handle no matter what the pressure. You won’t impress anyone if you’re passed out in a flowerbed covered in puke.

The Rules of Engagement
Here are a few rules to try and remember when drinking in China, especially at a banquet dinner. If you break them as a foreigner you'll usually be forgiven as you're not expected to know them anyway. But following them is easy and will show that you respect the customs.

1. If you’re giving a toast, be sure to toast the most important person first. The toasts after that are not as crucial, so you don’t have to keep track of everyone’s social standing. You can fill your glass and say: "[Person]，我敬你” (wǒ jìng nǐ), which basically means "[Person] I respect you (and want to toast with you)”, and then fill their glass. It will be highly appreciated.

2. Toasting is very important, and will be done frequently. The simplest way to toast is to raise your glass and say "干杯" (gānbēi), which literally translates to “dry cup”. Down your drink in one if you can.

3. Whether you are toasting or are being toasted, try and keep your glass below the other person’s. This is a sign of respect and basically puts you in a lower position. Don’t be surprised if the other person will try to lower his or her glass too. If that happens, just try to lower yours more. Yes, it’s silly, and it’s not unheard of for both glasses to hit the table.

4. If you don’t want to get completely wasted and just drink a little bit, get ready to be ridiculed. It’s either stay sober, or go all-out. At least if you want to keep your dignity.

5. Whether you think it's sexist or not, women are not expected or required to drink as much. It's easier to politely decline yet another refill without the subsequent taunting, but women will probably get extra respect if they can drink.

6. You can drink by yourself if you want, but it’s politer to drag others with you into the abyss. It’s also smart to limit your alcohol drinking to toasts only.

7. If you’re absolutely, positively sure that you can’t drink more, do. Remember that your team’s pride is riding on your shoulders. Whether that being your home country or the color of your shoelaces, you don’t want to let them down.

8. However, don’t gloat about it too much or cause anyone else at the table to lose face. If you’re amazing at drinking, it’s advisable to act drunker than you are.

The Occasions
There are a great number of Chinese traditions and holidays where you are sure to encounter a banquet style dinner. Spring Festival with the in-laws is one such sweat-inducing event. Much more than just being able to hold your liquor and to toast correctly will be at stake there.

Weddings are other important boozy events, but unless you’re the one getting married, you can allow yourself to relax and slowly drift into the land of báijiǔ intoxication. Just like anywhere else in the world, weddings are among the most important events you can attend. The dinner banquet will put your skills and liver to the test.

If you're at the dinner banquet, you'll realize that the toasting never stops. As the faces of your table-mates turn more and more red, their Harbin dialects start to make even less sense, the jokes you don't understand start to be funny, and you realize that this might be one of those nights when you meet the porcelain god. But by then it's already too late to back out.

This is the essence of Chinese drinking culture. Welcome.

Learnt something new here which I have not paid much attention prior to this, try to lower my glass in the future to show respect to others.

thought they were doing away with the banquet culture