A Day at the Barber Shop: Getting a Haircut in China In 2008 I was new to China and couldn’t speak Mandarin well, but my hair was getting shaggy so I went to the barber shop. I took a seat, then told the guy “hen xiao” (very little), while signaling with my fingers that I only wanted a tad snipped off. Instead, he apparently interpreted it as “little hair left on the head.” To make a short story even shorter, I was called Lt. Dan (from Forest Gump) at my new job for a month, and every time I’d get up from my seat or walked, I’d hear the ridicules continue with, “Lt. Dan, you got new legs!” To prevent this embarrassment from happening to you, here are some tips for those daring to step inside a Chinese barber shop. 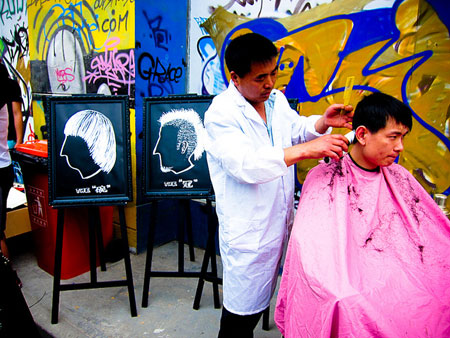 Types of hair salons in China

The high-class styling salons can be on par with the fancy ones you’d find in New York or London, but these are mostly only found in China’s top tier cities. Here, they’ll most likely have well trained hair stylists, use top of the line products, and will also hand out iPads for you to play with while waiting. Expect to pay hundreds if not thousands of RMB at places like these. However, as the old saying goes, you get what you pay for, so you can get that new trendy cut that all the models are flashing or, for all the guys out there, one that Derek Zoolander would be jealous of.

The middle/upper middle level places can cost anywhere from 30-500 RMB, depending on how simple or extravagant you want to go. I (a guy who doesn’t care too much about his hairstyle as long as it doesn’t resemble Lt. Dan’s) usually go to places like these and gets the cheapest option for around 40 RMB; which includes a shampoo, conditioner, a 20 minute scalp massage and, of course, a trim. For women, they offer styling, dying, nail treatment, and pretty much just about anything else you’d get back home. Nevertheless, it might be safe to say that the quality may not be the same as what you’re accustomed to, especially if you’re picky about bad hair days.

At the bottom of the totem pole, you have the old school barber shops that are holes in the wall. The bleak atmosphere is barren, the service is basic, the prices are cheap, and the barber is usually either an older male born before the Revolution who only really knows how to shave heads or young men with crazy 80’s hairstyles. If you’re a guy with very short hair or don’t care at all what type of haircut you get, these places aren’t bad because it will only cost 10-20 RMB. Some of these joints also have female barbers these days, but they mainly specialize in the infamous Chinese bob cuts that have survived since the days of Mao.

Last on the list are brothels. Yes, you read it right: some brothels are disguised as barber shops in China. These places can come in many different styles, but most are small boutiques with red characters, pink lights and a few young and/or even older ladies waiting patiently behind two glass doors. You’d have to be blind not to recognize the cover up. But then again, if you’re a newbie to China, looks can be deceiving. As a rule of thumb, if no one is getting their hair cut, and your hair stylist is dressed like a porn star, you may want to stay clear.

Many women need to be aware that sometimes the dye these places use are “Made in China” and may be low quality or fake. According to my female colleague, some dye can turn your hair green! If you regularly dye your hair, it might be a good idea to spend some extra cash at a reputable place. Furthermore, if getting a perm or some other special kind of treatment that involves a lot of technical steps, beware that it more than likely won’t turn out the way you wanted. If you’re into fashion, it’s recommended to spend more and go to a higher-end establishment.

Other times, some salons will try to swindle people into buying the hair conditioning (护理) option that can cost an outrageous 1,000 RMB. They’ll try to persuade you to buy a tub of “top of the line products” that they’ll store in your “very own personalized locker,” and only use them on you when you visit. Most of the time this “special deal” is a rip off since they use cheap products bought from the neighborhood Merry Mart.

Quite often, hairdressers in China will try to persuade you get a tacky style that they think is fashionable or would look good on you. Stand firm and don’t let yourself get bullied into a cut you don’t want just because you’re trying to be polite. It’s your looks that are on the line after all!

Last but not least, most hairstylists in China are only used to cutting one or just a few types of styles. I and just about every other Western male I know complains about them cutting the sides too short while leaving the top too long. In fact, it has come to the point that the first thing I say when I enter is, “Don’t cut the sides and only cut the top.” This usually translates to them still cutting the sides and still barely cutting the top, but it’s less severe than what would usually happen if I don’t say anything. To prevent an accident, try bringing a picture of the hairstyle you desire and start praying.

In the end, especially for those newcomers to China, don’t worry, it only gets easier over time. I’ve progressed from being horrified to getting my haircut to it being a normal routine with good results. However, the days of looking like a character from Forest Gump will always linger in my memory, and  it’s the reason why every time I’ve move cities within China the first questions I ask my colleagues is, “So, do you know any legitimate places for a decent haircut around here?” To make the situation a bit easier for you, we’ve compiled a list of useful hair salon vocab to help you get on your way. Good luck!

Keywords: getting a haircut in China Chinese barber shop

I agree with Tauney! I have naturally curly hair. I wanted long layers, I mentioned it specifically with body language and via clear translation through my friend who is bilingual. He just chopped a big chunk of my hair and gave me a typical Chinese haircut anyways. Long in front and short in the back. I left the place in tears, and the person claimed that he has 10 years of experience, and no one has left his place ever crying. I guess he can't say "never" anymore. They also don't know how to do the highlights correctly on my type of hair. Luckily,I had to go HK in couple of months, so I decided to fix this chaos over there. I was extremely satisfied!!!

Every girl with curly/wavy hair has left a place like that in tears :( ... The Chinese face thing just doesn't allow this, so they're not used to seeing it. (Or even pretend not to see it when we do it. I bet his "never" is still a "never".)

I went to a couple in Shanghai. One was 70 kuai very good. Other 110 kuai. High end place. Very good cut and also massage, wash hair well, cup of coffee etc. I liked that place very much despite it being in a shopping mall in Minhang District.

Look at your barber's hair, because that's inevitably how yours will turn out. If you don't like his hair-run.

How difficult is it to get a haircut? Pinyin might be useful for the useful phrases. ;)

re. forrest gump: that is the standard chinese cut. no matter what i ask for it always comes out like that. even when i say 'pangbian he shangmian yiyang de'. i think i will start going to the fancy ones and take my chances there. my friend had a brazilian once at a stylish salon, apparently they throw in massages and nice beverages too. prob worth the extra few kuai.

Another issue is that they have zero idea about how to deal with naturally curly hair. A friend of mine who had beautiful curls ended up leaving the salon in tears, sporting an Afro, because they didn't know how much to cut off. My hair's naturally wavy and they very seldomly dry my hair completely, so in the Guangxi humidity I turn into a fuzzball within five minutes of leaving the salon.