6 Good Chinese Bands You Should be Listening to Someone whose only exposure to Chinese music is Chinese radio stations and karaoke might have the impression that Chinese music is nothing but the sappy love ballads and bubblegum pop of Mandopop idols. They would be wrong. China's music scene is full of socially conscious, artistic, and technically skilled artists creating all genres, including rock, folk, punk, and even traditionally Mongolian-inspired music. You just need to know where to look. To get you started, here are six of the most innovative and exciting Chinese bands playing today. 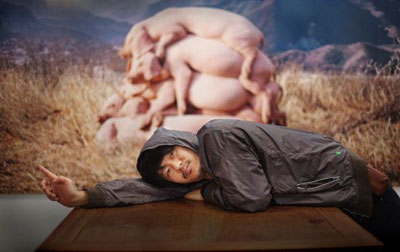 1) Avant-garde: Zuoxiao Zuzhou
A poet, novelist, composer, musician, and founding member (along with Ai Weiwei) of Beijing's East Village artist community, Wu Hongjin, whose stage name is Zuoxiao Zuzhou (左小祖咒), is one of the most creative and experimental Chinese rockers active today. He founded the band No in 1994, then went solo in 2001. A long-time friend of Ai’s, he’s collaborated with him on art and political projects. Zuoxiao Zuzhou was detained for one day in 2011 after writing an op-ed for a Hong Kong newspaper in support of Ai during his imprisonment. He has been hard at work lately, releasing four albums since 2011.

While many of his songs contain references to social and political issues, his song Injustice (冤枉) suggests he has a more detached view on politics, recognizing the danger of addressing politics head on:

I try to summon strength by being silent for a long time
All just to dredge thought for advocating their noble souls
You already act, to be at ease. Being at ease is freedom.
Freedom is a Human Right. But Human Rights are politics!
Comrade, you have stumbled onto the stage of politics.
By whistling insanely for a moment I try to establish a monument of experience.
All just to open a portal to announce them:
“Tourist Comrades, carriage twelve is on fire,
passengers of carriage eleven, the fire will get to you any moment!”
Ladies and gentlemen, we are in the underground. Not the underground elite, just a passage.
You’re no poet, you don’t like politics, I’m no punk either
We’re just the vagabonds in carriage thirteen. 2) Punk: Brain Failure
Founded in 1997, Brain Failure (脑浊) has become a seminal band of the Beijing punk scene. Their rollicking anthem Coming Down to Beijing fires up crowds everywhere. They have built up fans overseas as well, having toured in the United States with the Dropkick Murphies, the Unseen, and the Street Dogs, and released an EP with Big D and the Kids Table called From Beijing to Boston.

Brain Failure sings their songs in English. Their lyrics often comment on issues faced by young Chinese city dwellers. In the version of Coming Down to Beijing on From Beijing to Boston, Dicky Barrett of the Mighty Mighty Bosstones plays the role of a bored American punk trading verses with Brain Failure's Xiao Rong:

I know what you mean, I just landed at home.
I don't know where I'm heading or where I'm gonna go.
The roads all lead somewhere new, but they're still so slow.
Yeah, this place ain't the same, the bars have all closed.
My friends live in the suburbs, there's no good shows.

Hey, you should come to China, hang out in Beijing for a while! 3) Dance Rock: Queen Sea Big Shark
When Queen Sea Big Shark (后海大鲨鱼) singer Fu Han takes the stage and starts dancing wildly, there's an infectious quality to it. It's like a trip back in time to CBGB's in the 1980's. "Almost Bowie-esque" is how PityTheCool.com described Queen Sea Big Shark's performance. Taking influences from New York art punk and B-52s-esque dance rock, Queen Sea Big Shark is unique among Chinese bands for their style and artistic craftsmanship. They take their name from the Queen Sea in Beijing's trendy Hou Hai bar and restaurant district.

They sing many of their songs in English, often with psychedelic and ethereal qualities. In the song Welcome Passengers, they sing: 4) Post-Punk: Re-TROS
The post-punk band Re-TROS (Rebuilding the Rights of Statues - 重塑雕像的权利) comes with the Brian Eno seal of approval. Recording their first EP titled Cut Off! in New York in 2005, Eno overheard them in the studio and decided to collaborate on three songs. In 2009, they followed up with Watch Out! Climate Has Changed, Fat Mum Rises.

NPR has recognized Re-TROS as an "anti-establishment" band because their songs contain veiled political messages and lyrics that they have to slip past censors. In their song TV Show (Hang the Police), they intentionally mistranslated the lyrics as "the police are laughing" when they submitted it to Chinese government regulators. The video (available on YouTube here) opens with scenes of a war with atomic bomb explosions, revolutionaries waving flags, tanks and bombers, political protestors, bombs dropping and missiles firing. 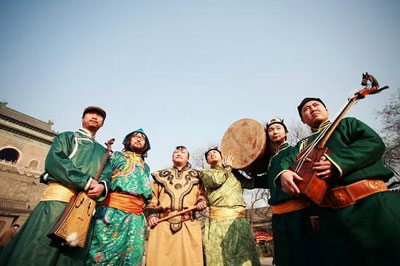 5) Folk: Hanggai
Hanggai (杭盖) is a Mongolian folk rock band trying to preserve Mongolian culture in an environment where modernization and development are rapidly causing minority ethnic groups to lose their traditional culture. In fact, the band's frontman Ilchi is a perfect example of the challenges facing Mongolian culture. An ethnic Mongolian, Ilchi grew up in Beijing and had to learn Mongolian as a second language in order to sing it. The band formed in 2004 after Ilchi became inspired to go to Mongolia and study Mongolian music.

Mongolian music uses traditional instruments like horse head fiddle and two-stringed lute, and a style of singing called hoomii (throat singing). Ilchi was previously a member of the punk and grunge influenced band T9. Hanggai takes influence from many other rock bands to produce a rock-inspired take on Mongolian traditional music. The lyrics of Hanggai speak to the way of life in Mongolia, which is heavily connected to nature. Take for example, "My Banjo and I":

My beloved white horse,
He takes graceful steps.
My beloved camphor-wood banjo,
It sings my laughter and tears.

The beloved grasslands where I was born,
I will sing my praise to you forever.
My beloved Mongolian homeland,
I will sing to you playing my banjo. 6) Visual Kei: Silver Ash
Silver Ash (银色灰尘) is one of the only visual kei bands in China. Formed in 1997 in Beijing, they brought the flamboyant visual kei style from Japan to China. Visual kei combines dark gothic sensibilities with the big hair and flamboyant costumes of glam rock and hair metal. From 2005 until now, Silver Ash has struggled and produced little new music, but on January 4, 2013, they released the single "Pretty But Evil," marking the start of their international comeback. They plan to release new songs in Chinese, Japanese, and English, with the release of "Reborn" scheduled for April 6.

Related links:
More Than Money: Rich Chinese Are Building Their Own Art Scene
Can China Ever Compete with America’s Unrestrained Creative Freedom?
Does China's Materialistic Image Really Represent Most Chinese?

i hope you guys know that they copied this article onto http://english.visitbeijing.com.cn/play/navigating/n214824560.shtml and didn't put any credit to the author! great article though - hope you're going to write more like it.

Brain Failure sounds very nice to me, i will check more and maybe buy, yes buy, an album :-)