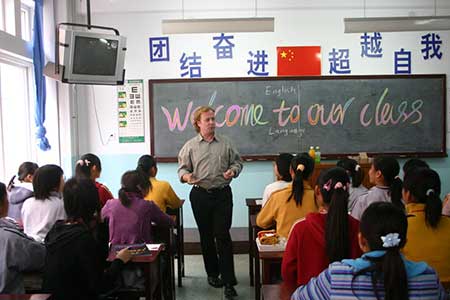 Language improvement comes down to focusing on two areas: providing an effective lesson and correcting the weakness.  Naturally, teachers will tend to put in more effort to create lessons that strengthen the speaking ability.  But I would argue that they should also focus on correcting the weakness because this may have a greater personal impact for the learner down the road. Simply put, many of these oral or written problems can create a negative impression, especially in an international work environment.  I have seen many adult learners at management level speak incorrectly, which could have been avoided if the teacher had paid attention to it.  Consequently, teachers should devise learning plans with a long-term focus but also make short-term plans to correct the most common speaking issues that are clearly more evident.  To help in this educational endeavor, I will outline four of the most common language issues that I have encountered while working in China.

In Asia, many English learners have a variety of pronunciation issues especially with its diversity of learning experiences.  However, in China with its distinct language and a large homogenous population, learners will share similar issues.  Three of the most common pronunciation problems are the following.

• Letter Confusion. This is when speakers incorrectly replace one letter with another, such as in the following cases: 1) they pronounce words with /l/ sound instead of /r/ or /b/ with /p/; 2) have difficulty with /th/ sound at the end words that sounds more like an /s/; and 3) be confused about short and long sounds as with /iː/ and /ɪ/ or /e/ and /æ/.  There are others.

• Letter Omission.  Speakers will often leave out letters or fuse them.  You will often hear speakers say, “energ” without the /y/ sound for “energy,” or “health” instead of “healthy,” or “ashen” instead of “action.” There are others.

• Word and Sentence Stress.  This when a person’s wording flows with a certain sounding rhythm.  In comparing Chinese with the English language, Mandarin speech may sound choppy and continuous as opposed to wording sounding of highs and lows.  Therefore, when Chinese speak English it will sound like a word by word speech pattern or slightly robotic.

The second issue for Chinese learning English is that they will usually make five kinds of grammar mistakes. Perhaps, many of these issues are the result of the Chinese language not requiring similar elements.

• Pronouns. Although insignificant for native speakers, it appears to be a small headache for many Chinese speakers, as it is a widespread mistake. In Chinese, there is a simpler identification and there are no gender words, so they would always mention ‘him’ instead of ‘her,’ and be confused when hearing ‘people’ instead of ‘person.’

• Articles.  Speakers will quite often leave out the articles ‘a’ or ‘an’ because the Chinese language does not use articles but makes identifications based references such with ‘this’ or ‘that’ item.

• Word Order. They have word order confusion.  Even though English and Chinese have some similarities such as both would say “money bag” or an adjective describing a noun, there are some differences.  In Chinese, an obvious one is that they don’t start questions with a ‘W’ word, as we generally do.

• Tenses.  As a whole, they will have great difficulty with tenses.  Naturally, with complexity of English tense rules, Chinese will generally use the simple tenses instead of the full range.

Solution. To help resolve these issues, consider games or handouts that focus on these specific issues and that reinforce the grammar rules inductively.

Depending on their age and environment, students will have two behaviors that may appear to be not conducive to language learning. First, students will tend to be passive in the learning process and therefore, will appear shy and hesitant to answer questions or show initiative.  Students at a language training center will actually wait for an “appropriate time” to talk, according to a teacher’s lead.  Secondly, they will not usually elaborate their opinions.  When asked questions, they will respond with a brief answer and if the teacher requests further clarification by asking, “Why is that?” they will say, “No why,“ and the communication ends.  For the inexperienced teacher, these actions may seem odd and contradictory to language learning, especially when students have paid a lot of money (about $5000).  But the fact is, they really like and want to learn English.  Regarding the former issue, Chinese students have a traditional school upbringing that instills within them a tendency to be reserved and respectful to the teacher and classroom.  While in the latter, students many not understand the pattern or the process that the teacher is looking for.

Solution. To help resolve these issues, the teacher needs to inform students, in a relaxed way, of his or her expectations regarding classroom communication, and provide students with speaking aides to encourage as improve communication.

Students, from young to adults will always use Chinglish.  What is Chinglish?  In the ESL field, it’s when the first learned language interferes with the second, and in China, it’s almost normal speech.  Basically, it’s when speakers combine Chinese and English words, ideas, misspellings or logic, and sometimes it can be humorous or pejorative.  The origins of a lot of Chinglish comes about through two sources.  First, quite often many dictionaries or textbooks are locally created, outdated or not used appropriately. As a result, Chinese people use terms, logic, and ideas that are vague, incorrect or not common.  You will often hear words or expressions such as, “pity”; “naughty”; “it is said that”; “you know”; “just a so so”; and “so on”.  Second, another source of Chinglish is the Chinese culture.  In China, things become Chinese, so English is sometimes spoken in a Chinese way.  Therefore, pronunciation, logic and expressions are mixed in an interesting way.  You will hear, “san q” for thank you, “bai bai” (goodbye), “cost down” (reduced), “ok ma” (is that ok?), “let me see see” (let me see it), “I give you color cc” (I will give you a black eye), and my favorite, “I like English but English don’t like me.”

Solution.  Since this language area involves cultural attributes, it’s wise to be cautious when correcting a Chinese person who is learning English.  So, an approach is to make speakers aware of the issue and to give them the choice to self-correct if they want to.

Check out more from Easyteaching, or find more blogs by our community here.

The real problem for ESL teachers is that we usually only get these kids for an hour at most for each class. All the while, they are being taught all the other English skills by Chinese teachers who insist on teaching English in Chinese and passing on their Chinglish to the students. Unless the school's administration focuses on getting quality near-native speaking Chinese educators in the classroom who truly excel at English, our efforts are often for naught. How many times has a student told an ESL teacher that their Chinese teacher taught them a certain way and that we, the native English teacher, must be wrong. That is not to say that we are totally ineffective as teachers, but to assume that we are solely responsible for their developmental success or failure is silly thinking. I suggest trying to teach away from the textbooks and provided other learning opportunities. For example, in my international class in a public school, I have been teaching five paragraph essay writing and other essay skills. Critical thinking skills, theatrical skills, and inferences are the majority of my lessons. The textbook is usually used to only supplement my lessons. Perhaps I am fortunate to have a school that does not enforce strict rules on what I teach. As a result, I am seeing much greater results in their English skills by becoming more non-traditional in my teaching. After all, reading is actually one of the best ways to learn a language. Couple that with writing, the students learn to see how grammar should be used and English development occurs.

Sounds like the author hasn't been teaching in China because these are issues, but definitely not the main issues in China.

How about "pure puke of an article"