Quzhou Man Set Up By Online Date, Tied to a Tree and Robbed by Thugs 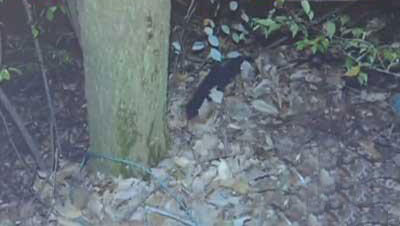 A man from Quzhou was tied to a tree, beaten, and robbed last month after being set up by an online date.

A woman had tried to convince a man named Wu on social media to meet up with her a number of times. Wu repeatedly refused, but his friend Wang said that he would go instead. The woman was 21 years old, and very pretty.

Wang and the woman went to coffee and dinner. She then asked him to take her home. They drove to a small road. Three large men suddenly jumped out from behind the trees lining the road. The men beat Wang, tied him to a tree, and continued to beat him.

Two men guarded Wang, while two others drove his car to a nearby ATM to withdraw cash from his account. The bank's surveillance tapes show two masked suspects dressed in a black coats, hats and gloves. The suspects withdrew 20,000 Yuan from Wang's account.

Wang eventually broke free from the ropes and contacted the police. Three suspects have been arrested,  one suspect is still at large. The case is still currently under investigation.

Inside sources tell me this is a new role playing type of game. Wang actually paid the woman and three men to do these things to him (its a form of sino-sex perversion S&M ). Yes, it usually costs that much to be tied to a tree, and then beaten to a pulp.

talk about jumping on a grenade...

This type of comment is now becoming cliche, I would imagine that the billions of people in China have better things to worry about than the actions of a few million foreigners temporarily staying here. When these type of events happen, the thought of us is probably not even registered, so, tone it down a lil will ya?

@kasuka: you dont know those comments are very much tongue in cheek? I can literally see the sarcasm dripping slowly off the words to form a puddle of satire that will meander its way into the raging torrent of wit and cynicism that is produced by the ECC community

Yeah, but it's so unrelated and random. True wit would draw on something more relevant to the subject of the article, for example, Sinobear's comment. That one definitely wins on flair and wit! Lool

Yh I guess I did. It's just that the China bashing here is somewhat becoming a tad bit excessive when people begin to make China digs that bear no relevance to the topic at hand. It comes across as fishing for upvotes rather than contributing anything of value to the subject matter.

@kasuka, stating the obvious is not China bashing. Some people here are way too sensitive. If you love China so much then why don't you apply for a job as a Wu Mao, or better yet, join the communist party? It's very hard to make positive comments when you read articles about corruption, kidnappings, tainted food products and other negative things that occur in China on a daily basis. It's not that everyone here hates China, it's more the fact that China tries to fool everyone into believing that the country is so honest, friendly and welcoming, when in reality it's not always the case. I'm not sure how long you've been here, but the longer you stay, the more you see.

I'm not oversensitive, I don't love China either and it definitely has its problems. China, point-blank, lags behind many developed and mid-income countries for many different indicators. It's got a very long way to go. However, it's not positivity that I'm after, just a bit more fairness and reason. When someone makes a comment about how this incident can somehow be linked to the supposed dastardly ways of foreigners, it's difficult to see the point in it. Sarcasm aside, it's just not that relevant to the topic or widespread in China. My point is, I feel that some people go on this website actively looking to trash all things China-related. It's the fact that most of the China bashing is pro-active rather than reactionary. It's okay to vent, but why China bash just for the sake of it? Then you just find yourself in a situation where you need to vent more right?

That's a fair point and I do agree.

Wu was supposed to woo her, but she got the Wang instead. Wang got jumped and stumped then pumped. I think it was an inside job - the Wu Tang Clan just wronged the Wang guy (and barked up the Wang tree for money).

You win all the internets for that sir!

It's good to see humour on this bile filled site.

As China is the land of copycats I'm guessing this will happen a lot more now.

Although I don't necessarily disagree with you, this is like the 4th China-hate post of yours I've seen today. Were you a midnight runner disgraced from a job as a kindergarten butt-wiper?

How is it a China hate post? I'm stating a fact. I don't teach either. I just say it as it is. If you don't like it that's your problem. I'm guessing you're one of these "I love China" people who have been here for a few months and are still in the honeymoon period.

The comment written by a "Guest" member that was here has been deleted after a number of you messaged us. Thanks for the alert.

I've been here for several years, if I hated it as much as you seemingly do, I would have just left. Some of us still haven't been disgraced in our home countries.