The Expat’s Guide to Living in Beijing’s Hutongs Early Beijing’s extensive network of residential zones, and what we have as hutongs today is all thanks to Kublai Khan, grandson of Genghis Khan. After the conquest of China and the founding of the Yuan Dynasty in the 13th century, Kublai Khan, moved the capital of his empire from Karakorum, Mongolia to Dadu (present day Beijing) and constructed one of the world’s most modern cities at the time. The Chinese locals took the medieval Mongolian word for “water well,” which phonetically sounded like hutong, and incorporated the word into Mandarin to describe these newly formed alleyways since these areas were where residents lived and fetched water. Today, hutongs are found all over China, especially in the north, but Beijing was and still is considered the original hutong capital of China.

I recently moved to Beijing and was looking for a new apartment. After speaking with a friend who had been here for some time, he suggested I look into renting a place in the hutongs to get the “true Beijing experience.” A day later, I found a cozy pad in the area of Gulou. Six months later I’m still here, but I can definitely state that it’s a love-hate relationship. For those thinking about moving into the hutongs, there are definitely some pros and cons to evaluate before making the move. Using my experiences, here is the expats guide to living in Beijing’s hutongs. 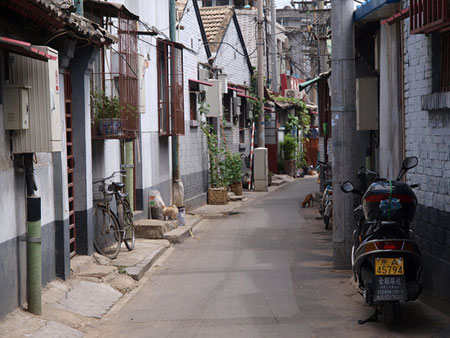 1) Rent
PFHub ranks Beijing as the 9th most expensive city in the world in terms of real estate, right between New York City (8th) and Singapore (10th), with the average monthly rent of a flat downtown costing $1,400USD per month. Living in the hutongs, conversely, is extremely cheap. You can find a small, studio-like pad with no bathroom/shower (basically just a bed) for roughly 1,000 RMB, but an average hutong with a shared restroom will probably cost around 2,000 RMB. However, if you’d like to live more comfortably, you can find a luxury hutong house that has been fully remodeled, refurnished, and refurbished with modern, 21st century luxuries. These, especially if throwing in a beautiful view of Houhai, are not only very expensive, but also rare.

2) Sense of community
Living in Beijing’s hutongs I’ve definitely seen how true Beijingers live day in and day out. The families occasionally get together to slurp up hot pot, ganbei shots of baijiu and play with their beloved dogs; and after getting to know me they regularly invite me to feast (and drink) with them. Now I feel like part of the family, and my neighbors even bring my clothes hanging out to dry inside to keep them from getting wet on rainy days, and they always keep an eye out on my house when I leave a window open to make sure no thieves get any funny ideas. Certainly, it’s hard to find such good neighbors in today’s all-about-me society.

3) Tradition and Style
The hutongs are ancient, packed with history and are even one of the city’s top tourist attractions, and these days, some have developed into pretty hip areas with great bars, restaurants and cafes. There is always plenty to do and usually it is just a short bike ride away.

But with that being said, there really is a hutong for everyone out there. If you want to live in a young, cool place with lots of foreigners along with cheap drinking holes and underground music venues, you should try the areas around Gulou, Andingmen and Lama Temple. For something classier and more comfortable, try the areas around Xinjiekou, Beihai North and Ping’anli metro stations. For an authentic, workingman’s hutong free of frothy cappuccinos, anything south of Tian’anmen Square will do the trick. Stay clear of Nanluoguxiang if you can as the houses there are extremely overpriced; you won’t get the authentic experience and you’ll square off with thousands of camera wielding tourist every time you walk out your door. Consider yourself warned!

1) Bathrooms
No guide to living in Beijing’s hutongs is complete without a discussion of the bathroom situation. This is by far the worst! Most hutongs don’t have their own bathrooms or toilets. I got lucky and found a place with my own private shower and urinal, while my neighbors share one at the end of the alley, but for #2 you’ve got to go to the communal outhouse around the block. It was definitely strange at first, but I’ve gotten used to it. I’m still not sure what my girlfriend from America is going to think when she visits next month. Having your own private toilet is certainly a luxury in the hutongs, and you can find some places (at a higher rent) that have them, but for the most part be prepared to visit the communal squatter if you plan on living in here.

2) Cleanliness
For some reason I feel it’s impossible to keep my hutong spic and span, and this really bothers me, being a neat freak and all. Somehow, dirt always flies in through the window, water floods during summer monsoon rains, a violent storm punctured a hole in the roof, paint constantly chips off the walls, and I even had a slight mold problem for a bit. I guess that’s the price to pay when living in a house that’s 700 years old. I definitely feel like I spend way too much time sweeping and mopping, so for all OCD-ers, you may want to reconsider.

3) Noise
This may be a little misleading since most hutong houses are located down quiet back alleys, but, as mentioned, my neighbors and I live in very close proximity. So while I am far away from blasting car horns on the second ring road, when my neighbors are out getting drunk and debating God-knows-what, I hear every bit of it and it can be a little nerve-wrecking. Furthermore, the walls are paper thin; when they’re getting their daily dose of propaganda from CCTV, I do as well. Oh, and let’s not mention the old-school landline telephone. I hate that damn telephone!

4) Disappearance
Hutongs are disappearing by the day. According to some estimates, a third of the hutongs have been eliminated since the early 1990s, while another third have been renovated to the point where they don’t even resemble their original style. That number is only increasing by the day as well, and in a few years it seems that most of the real hutongs will be demolished in favor of modern apartment complexes. Single story houses taking up the majority of Beijing’s center is actually one of the factors driving up rent prices, and developers see an opportunity in the housing boom to get out with the old and in with the new. So, if you do find that perfect hutong, watch out; a few months later you may wake up to see a giant 拆 (verb: to tear down) spray painted on your door; your cue to get the hell out!

In the end, I’ve learned to accept the cons of hutong life and live through them, meaning I’m still content with my quaint house and really enjoy living here. However, looking into the future, sometime next year when the lease runs up, I’ll probably be moving out to a more modern apartment. It’s been a great experience, but it’ll definitely be time for a change by then. However, I know when I’m sitting on my IKEA couch on the 30th floor looking over the flashy high-rises of Sanlitun just like every other expat in the city, I’m going to get a little nostalgic thinking about my old hutong house.

2000rmb for what's basically a toilet-less bedsit is insane

No hutong house in Beijing is 700 years old and the city doesn't experience much of a summer "monsoon". If you want a "real China" experience then come and live in a small city in Anhui or Henan - it's real because it's brash, concrete, has more money than culture and although you might be able to take a dump indoors you won't see a hipster on a fixie ... ever. And that's probably a good thing.