A staggering 18 lines are on the drawing board for Chongqing’s Rail Transit network, but right now, only four are operational. The latest addition to Chongqing’s rail network is subway line 6. Demurely represented in pink, this metro line cuts some heavy metal across much of Chongqing’s up-and-coming Liangjiang New Area. Although now Line 6 ends in Wulidian, when fully opened, the pink line will cross both the Yangtze and Jialing Rivers to terminate in Nan’an District. Currently, the main attraction along Line 6 would be Beibei district. But there are a number of smaller activities along Line 6 that are well worth your time.

Line 6 cuts diagonally across Chongqing city, from Yuelai and Beibei to Nan’an. At Lijia, the line forks out into two, with one prong in Beibei District and the other in Yuelai. The other end terminates in Wulidian. It will eventually reach Chayuan in Nan’an when all stops are open.

Main Attraction: Beibei District
Prior to the advent of Line 6, Beibei District was an outlying part of town, reachable only by long-distance bus. Considerably less built-up, this district enjoys better air quality readings than the rest of the municipality. Besides being a good place to take a breather, the area is also replete with attractions, most requiring a transfer to a district bus. A dedicated train line does make day trips more convenient although if you want to visit a few attractions, staying over is a good idea.

Beibei is usually synonymous with Southwest University, which is one of the few credibly-ranked local tertiary institutions. Vegetation on the tree-lined campus is a refreshing change from the stunted, leafless varieties cropping up all over downtown. For local food fans, the on-campus restaurants do not disappoint, though foreign grub is virtually non-existent. However, this new rail connection will likely make the university an attractive option for expats, so it probably won’t be too long before some edible western food shows up. 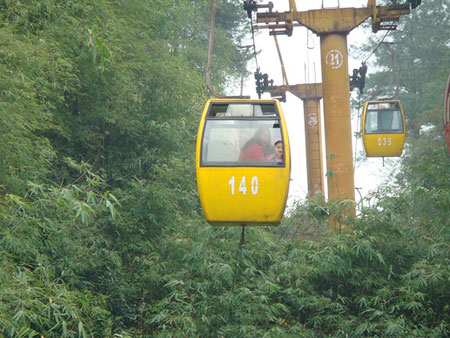 Getting to the top of Jinyun Mountain, Bei Wenquan Park
Source: mattsiwen

Beibei is also synonymous with Bei Wenquan Park (or North Hotsprings), at the base of Jinyun Mountain. From its name, it is easy to guess what the attraction is about – a hotspring within a park. Those fazed by local communal showers can check into a number of hotspring hotels in the district, including the swanky Banyan Tree for your own private spring in the comfort of your hotel room. Hotsprings are perfect for Chongqing’s clammy winters, especially if you have spent the day exploring some of Beibei’s other attractions.

While downtown Chongqing very rarely experiences lasting snowfall, Jinyun Mountain will often be covered in it (disclaimer: machine-generated snow is sometimes used to help mother nature along and keep tourists happy). At other times of the year, the mountain’s nine peaks provide lots of room for exploration and some refuge from the summer heat. Jinyun Mountains is also famous among the religious for giant statues of the Buddha and Guan Yu, a general from the three Kingdoms era.

China’s natural attractions are often not for the faint-hearted and Jindao Xia (Golden Knife Gorge) is a classic example. The name should give a clue to the appearance and danger involved in a gorge likened to a knife’s edge; definitely not for people who are claustrophobic. Should you find yourself stranded on a narrow ledge-like path hemmed by a steep mountainside and a steep drop, rest assured that sedan-chair operators are ever willing to come to your rescue for a fee.

If old towns are your thing, Pianyan in the northeast, harks back to the Qing dynasty. For a slice of ancient Chongqing, take a walk in this old town along the side of a small river to check out local tea houses, restaurants and souvenir shops. Buses going to Jindao Xia also pass by this area.

Dajuyuan (Grand Theatre)
Dajuyuan is Chongqing’s answer to the Sydney Opera House, a squarish puzzle of a building, whose green veneer matches the waters of Jialing River. The theatre hosts operas, musicals and dance performances from China and abroad. The new subway stop will likely help give this place more life as it’ll become far more accessible to the masses. There used to be a cable car connecting it to Yuzhong District but that was taken down. If you are looking for some family-friendly activities near the area, the Science Museum is around the corner.

Jiangbei Cheng is also home to Central Gardens which houses two churches – one Protestant and one Catholic, built in European-style, probably to cement the area’s reputation as a cultural destination. Newlyweds will congregate outside the Protestant church in full wedding gear. If you are there on a weekend you’ll be able to witness the “mass” photo shoot, where one photographer can service four or five couples in tow, each taking turn to pose at exactly the same spot. The Catholic Church does have a rather serene open-air tea garden serving kungfu tea.

Guobuo Zhongxin (International Exhibition Centre)
The Liangjiang New Area up north is where cutting-edge technology and serious industry come together, complete with its own exhibition district in Yuelai. The Guobuo Zhongxin, which covers 82,000m2, even boasts its own metro stop. Be sure to check that something is on before heading out, as staff of the McDonald’s there said that the outlet only opens if an exhibition is running.

Interchanges - Hongqihegou (Line 3)
Hongqihegou is the place to change trains for the airport and Chongqingbei (long-distance) train station or to go south to Nan’an district. You’ll be able to catch the airport express bus at Yutong Hotel or catch a bus at the long-distance bus station.

Xiaoshizi (Line 1 – not yet opened)
When all stops are opened on Line 6, passengers can also change to Line 1 (the red line) at Xiaoshizi, better known as Chongqing’s wholesale district where retailers and bargain hunters throng. Xiaoshizi is also walking distance from downtown Jiefangbei (the CBD) and Chaotianmen (the river confluence).

Gardens
There are also a number of lesser-known neighborhood gardens along Line 6. Conveniently, they inspired the names of the metro stations built close to them – Dalongshan Garden, Huahuiyuan, Caijia Central Gardens and Zhuangyuanbei Garden.