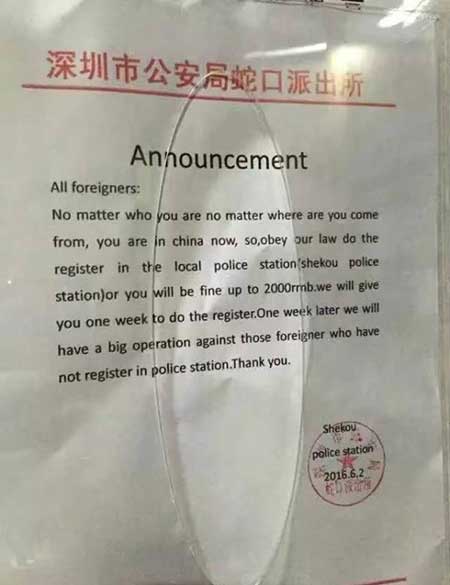 Shenzhen Shekou police posted a bulletin in English last Thursday warning about a potential crackdown on unregistered foreigners. The announcement was written in a very serious tone but used Chinglish, which made it seem a lot less scary than it was supposed to be.

Shekou, a popular expat area in Shenzhen, has been having issues with unregistered foreigners. There have been a few accidental deaths in the area this year, and police were unable to identity the foreign victims because they had not been registered.

Police posted the bulletin in order to warn foreigners living in the area to register before June 17.

Government announcements in English in China are relatively rare. The bulletin users a tough, non-diplomatic tone with phrases like “obey our law.” Netizens have mocked the announcement, and it was even translated back into Chinese in form of a classic edict.

Netizens have also made fun of the Chinglish used in the announcement, like the awkward phrase, “have a big operation against.” Police staff said that the bulletin was put out on short notice and that it was the first notice in English ever put out by the station.

Shenzhen police said that the bulletin has been successful, and a lot of foreigners have come to register after the notice was put up in the community.

The most important thing in China is the law. I have never been in a country where everyone takes the law so seriously. Seeing as the population of China has done such a good job of showing us barbarians, what a society based on the rule of law looks like. It should be easy for us to learn and follow the examples of orderly law abiding local citizens.

You know Shenzhen has some of the best ESL educators in Mainland China. Would it have hurt too much to hire someone to translate that gibberish for 300 Yuan? Especially since the operation will probably cost XYXYXYXYXYXYXY and do absolutely nothing... except punish one poor guy from East Ukraine trying to eat a second rate sandwhich.

Wumaos are out in force

Yeah, so are the sissies who get upset too easily.

Exactly. One foreigner not obeying the law in China is like a country's worth of Chinese not obeying the law abroad. I suppose this is why Thailand has "Chinese Only" toilets in their famous sites now and why last week Japan tried to smooth over the behavior of some Chinese going into a forbidden area in one of their flower parks and ruining flowers just to get some photos by saying things like "Well, you know the Chinese, they just want to take the best possible photos. Perhaps we will open a new "Chinese Only" section of the park so they can do whatever they want, as usual". Not to want to cast stones at others but when you point a finger in my direction, I will point two hands worth of fingers back at you. they really should look from within before they try to blame the world for their own problems.

I don't see how this is news and why people are reacting in the way they are. Locals need to register at their local police stations too. They have ID cards to do that. Putting up signs in areas where foreigners will be is also fine. Foreigners might not be aware of these laws and it would be unfair to fine somebody for something they didn't know about. They even gave everyone a week to see the notice.

I'm sorry I don't understand what you mean. Can you reiterate please.

Can't you guys see the writing on the wall...literally? These monkeys don't want us here. Not now, not ever. Time to go home.

YEs, time to go home from here if you are living illegal ! Of course they will not want you here...

The last time I moved I went to register at the local station and the cops had no idea what to do, I had to explain that I was supposed to register with them, they didn't seem to know. It took hours and I was sent to another part of town to get the forms for them. No wonder people don't bother.

I agree with the police ! I am registered every time I exit/entry in China. I don't see anything bad in this or against foreigners ! Is just the law and we must respect it in order to living here.

Because most jobs are Monday to Friday and the police office close at 6:pm, most of us get off at 5:30PM so 15 minutes to get there and 15 minutes to finish? A little tight.

No way ! The police station is open including Saturday and Sunday ! Check out and do not find excuses again because this will cost you money ...

The only reason this 'story' and many others are on the site is to try and provoke comments. Any reasonable person knows that they should obey the local laws no matter where they are. The English is not perfect? - So what,at least it is understandable, and even a courtesy. They could have put up the notice in Chinese, then enforce it on everyone. For your own safety you should keep some contact information on you whenever you go out.

These chinglish jokes have become very tired. If English is to become a lingua Franca for international business, then it has to be flexible and accommodate all forms of expression. Hinglish (Hindu) and Spanglish is no different.

English is already the lingua franca. Surprise! No one wants or needs to adapt your Chinglish, sorry. Also, the dollar will be the reserve currency for another ten or twenty years. Hope you approve.

Chinglish, English, or Chinese, this is not amusing. Imagine this happening in Chinatowns in USA, Australia, U.K., and Canada...... it wouldn't. The fact that laws need to be obeyed is redundant to be mentioned via such means. If a shoplifter goes to a convenience store in another country, should the police post a notice to remind them that "Shoplifting is against our laws. Please cease your efforts because we will be conducting an operation to punish violators."? If you are a guest in someone's home, shouldn't we expect to feel welcomed? Yes rules are rules but there is a better way than to threaten your guests with major operations and fines.

Your example is not relevant. Shoplifting is illegal in every country. Whereas there are plenty of countries where you are not required to register yourself. I think it is absolutely fine to make people aware of such laws. Also China towns are not inhabited by foreign nationals. Those "Chinese" that live there are nationals of that country. You will however see such things in hotels and airports. For example if you go to Bangkok you will see signs up everywhere written in Chinese reminding them that littering and spitting is illegal.

I knew that, which is why I wrote such an outrageous comparison, to express my disgust for this behavior. Clearly sarcasm is washed off on you.

Yeah maybe it did wash over me, English is not my first language. But either way it's only your example that's sarcastic your argument is still the same. Which means my point is still valid there are many countries where you are not required to register and therefore being made aware of those laws is completely acceptable.

The point is that the tone of the notice isn't appropriate. What need is there to say "no matter who you are or where you come from, you are in China so obey our laws"? This isn't serious, and makes foreigners feel liek they are being accused of doing something wrong. Why couldn't they just say "we would like to remind you that you have to register within a week or you will be fined"?

Chinglish ........so the same person that wrote the notice, wrote the article and in my 7 years here, I never knew that chinglish was really the locals way of taking the sharpness from the english language, very very nice of them

All Chinese: it matters who you are and where you are in society, so figure that into what laws apply and how they apply to you

Well...at least they have fair warning. That's something! Maybe make the registration process simpler and quicker that could be a good idea. Tai Bloody Mafan!