Urdu to Uber-Modern: A Brief History of the Bund

If you were asked to pick an iconic view of Shanghai, you would most probably choose the view across the Huangpu from the western bank, out towards the Pudong skyline. The futuristic Oriental Pearl, latticed Jin Mao, and 21st century World Financial Center make up one of the most instantly recognisable panoramas in the world. But the other side of the river holds a view that is equally famous, and even more historic. While Pudong was just marshland a couple of decades ago, the Puxi waterfront was a hive of activity, economy, and intrigue. The famous stretch of road has been immortalised in film and literature, as well as on countless picture postcards. J. G. Ballard’s novel ‘Empire of the Sun’ which charts the author’s experiences of Shanghai in the Second World War mentions the Bund, and Steven Spielberg’s movie adaptation uses it as a location. The Hong Kong television series of the 1980s, eponymously named ‘The Bund’, depicts the gangster era before World War II, as does the 1996 movie ‘Shanghai Grand’.

The mile-long stretch of Zhongshan Dong Yi Lu in the Huangpu District that faces Lujiazui is better known as the Bund [wàitān | 外滩]. The history of the road runs parallel to the story of Shanghai under foreign control, as well as the internal wrangling that followed the end of colonialism. 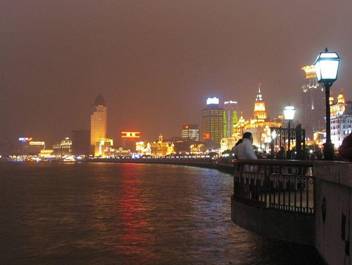 The word ‘bund’ has a surprising heritage. It comes from the Urdu word band meaning embankment. Modern-day Baghdad has many of these bands. The word came to Shanghai via the powerful Iraqi-Jewish Sassoon family and became bund. The Bund as we know it lies to the north of Shanghai’s old walled city, in what was originally the British Concession. The Brits joined forces with American colonialists in 1854 and the area became known as the Shanghai International Settlement. This, along with the former French Concession spanning the Luwan, Xuhui and north Changning districts, bequeathed Shanghai a lot of the Western-style architecture we see today, and contributed to the city’s cosmopolitan feel.

The last years of the 19th century through the early decades of the 20th were boom times in Shanghai. It was one of Asia’s most important financial centres, and grand buildings began to spring up on the Bund. By the 1940s, all of China’s major banks had their headquarters there, as well as telecommunication companies and newspaper offices. There were also luxury hotels, bars, and gentlemen’s clubs to cater to the expat financiers and economists who worked there.

However, the Bund’s heyday came to an end when the Communists rose to power after the civil war. Financial firms were forced to abandon their headquarters as the government seized the buildings to use as offices, and the once-decadent hotels and clubs fell to rack and ruin. This went on until the late 70s. At the start of the 80s, buildings started to be returned to their former tenants, but not all of the former companies were permitted to move back in. The Bund changed in other ways too. Because of flood threats, a 10 metre levee was raised along the riverbank forming a wide promenade. In the 90s the road was widened to 10 lanes and most of the ferry wharves removed. 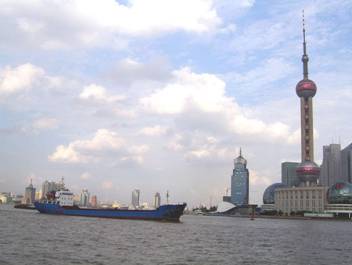 In an attempt to exploit the Bund’s popularity with tourists and extend its appeal to less-visited areas of Shanghai, the municipal government named the Zhabei riverfront ‘New Bund’, but this somewhat fanciful concept never really caught on.

The Bund proper runs from Yan’an Road in the south to the Waibaidu Bridge in the north. Formerly known as Garden Bridge, this metal dragon-tail of a structure was opened in 1908, the first all-steel bridge in China. It has recently undergone a complete renovation. Where the Bund meets Nanjing Lu there is a bronze statue of Shanghai’s first Communist mayor, Chen Yi. This is the Bund’s only statue, surprising when you consider the city’s penchant for statuary. However, true to form, the northerly reaches of the Bund are blessed with the Monument to the People’s Heroes in Huangpu Park, an oddly-shaped concrete monolith commemorating revolutionary ‘martyrs’.

The Bund’s buildings are a motley group of grand grey edifices in a variety of architectural styles including Gothic, Neo-classical, Romanesque, Art Deco, and Beaux-Arts. The original purpose of these buildings hints at Shanghai’s position as Asia’s premier financial and mercantile hub. No. 1, now the Asia Building, was once the McBain building, the Shanghai headquarters of Royal Dutch Shell and the Asiatic Petroleum Company. No. 2 was the famous Shanghai Club, the social epicentre for British expats, while the Union Building at No. 3 housed insurance companies.

An example of the Bund’s international appeal could be seen in No. 4 and No. 5, the Mercantile Bank of India, London & China, and the head office of a Japanese shipping company respectively. History was made at No. 7, the Great Northern Telegraph Corporation, where Shanghai’s first telephone switch was made in 1882. 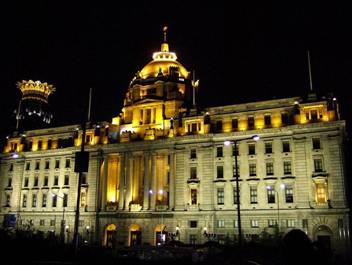 There is plenty of history behind No. 12 too. The Hong Kong Shanghai Banking Corporation moved in after the building’s completion in 1923. However, the HSBC never managed to broker a deal with the government when the building was freed up in the 80s, and the Shanghai Pudong Development Bank moved in instead. The intricate ceiling mosaics have been returned to their former glory, and can be seen in the foyer.

No. 13 is probably the most iconic building on the Bund. The Customs House and its clock tower were built in 1927 on the site of the old Chinese customs house. The clock is the largest in Asia and mimics Big Ben in its design. Also architecturally interesting is the Peace Hotel, made up of the two buildings at No. 19 (the former Palace Hotel) and No. 20 (Sassoon House and the old Cathay Hotel). No. 20 is unmistakeably Art Deco in style, and contains a famous jazz café. The Bank of China building at No. 23 is noticeably smaller than its neighbour, due to the Sassoons’ decree that to Bund building should be bigger than theirs.

If you go to the Bund today, you’ll notice vast construction sites as well as historic buildings. In the run up to the 2010 Expo, much of the road is being redeveloped. The Waibaidu Bridge has been fully renovated, and the roadway will soon consist of a double level set of lanes, making way for the replacement of the parkland that once was there.