Road trip Across the World-Next Up: Jiuzhaigou

The monastery itself looked more like a small town with buildings and courtyards dotted all around the place – all donning the deep purple and white colors of Tibetan Buddhism. As we strolled up through the court yards the token monk / ticket collector jumped to life but this time we managed to send him packing by pointing 3 large-lensed cameras in his face. He must have believed we were trying to steal his soul, as we never saw him again. 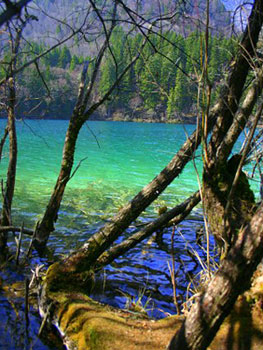 What happens to Buddhists when they have their picture taken? We wandered around admiring the wall paintings and pray flags but the real picture here is the devotion of so many. They say a picture paints a thousand words, its clear to me now, that in some situations a thousand words is not enough. It’s hard to describe true devotion, as it sparsely exists in our worlds. We live in a time of fancy fashions and disbelieving doctors. Where, to many, the word devotion is a rare as honor and belief. But here such things form the fabric of society. It's hard not to be captivated by those here, who put so much into something with no obvious reward. It must be a wondrous thing to still have mystery and surprise in your future.

After numerous feet stamping, toys thrown and tantrums, Alex took his finger from the camera and left the poor people of this small town alone. We mounted up and started to head south towards Jiuzhaigou. The guidebooks describe the area as a must see tourist site, of blue pools and perfect waterfalls. Its location was quite remote, with the nearest major town and airport being hours away so we thought it would be a quiet day trip away from the hordes. 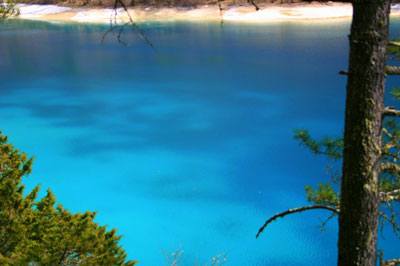 We were wrong. Through the winding valley you hit it, hotel after hotel, after hotel. Neon sign after neon sign, what have we come to? We parked the trucks and strolled towards the main entrance. Once we had battled past the tour groups with their matching hats and flags and the marching workers parade, we hit it: the most advanced ticket office in the world, you would have been forgiven for thinking you were purchasing an airline ticket. The only true way to describe what we saw would be to ask you to watch Jurassic Park. Huge electronic ticket booths, CCTV everywhere and aircon buses shipping you to each site. In the normal way, we jumped ship as soon as possible and set off around the park on foot, which is the only real way to see these great sites.

The national park consists of snow capped sheer-sided mountains running down into a lush green valley. Throughout which lays hundreds of small pools and streams to which the aqua blue snow melt rushes down. It truly is a spectacular site with water a color not thought possible. 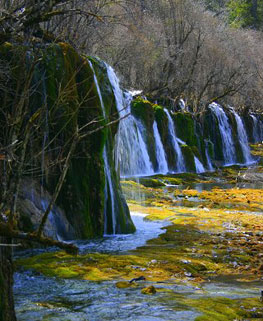 We trekked for many hours along river banks and trails, on numerous occasions finding the need to jump the high fences restricting access to the public, but with our "I'm British" philosophy, as our get out of jail free card we would be fine.

This area really is a must see site and well worth any trek to get here, you just need to loose the million or so tourists that come here each year. You sometimes forget that China has a population of Europe and America together and so has a huge amount of internal tourist movement.

Back to the trucks and back to the road, we had many miles to our next destination, Chengdu, and were in need of a little down time. The existing roads were in shocking condition made worse with the new high way being built on top. Tinfish was showing some where with a blown tire and a cracked rim, we where close to getting stuck. Tempers were being tested and the team was tired, but we made it. We limped to the metropolis of Chengdu and found some guy with a blowtorch and puncture repair kit and let him loose. Martin had his continual punctures fixed on nearly all his wheels, I had began to wonder if he thought it was me going around the truck letting the tires down simply to wind him up. It began to rain, the first we had seen for months now, but never a welcome situation on the one day you have to relax and wander.

Chengdu was like any city, big, expensive and busy. You could shop to your hearts content here, but none of us have any need for more clothes or fashion accessories so no real point in this. Max takes a break from driving! So the day was spent sorting kit, writing post cards and chilling. This was all except Mark, who decided to drink a little bit of wine for breakfast. So off he went on the search for a wine shop. A couple of hours later we saw him on his way out to get more bottles, and this time he was walking with a swagger to his step. Later on in the afternoon, knock, knock at the door, Mark stood there decidedly unsteady on his feet declared to us all he was hungry and going for noodles. A good idea we thought, our blind drunk guide wandering around a city he does not know. We laughed at first then realized if he gets arrested that we were stuck too, but before we could stop him he was gone, the hunger calling had taken him. The hours passed and no Mark until walking past the room you could hear what can only be described as an elephant sneezing. On further inspection it was actually Mark snoring like a champion next to his 3 empty bottles of wine. 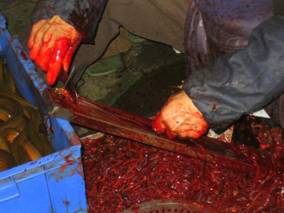 It's clear that China is changing quickly and the pace of advancement is increasing. Now is the time to see China still with its rustic charm and country people, as soon this will be hard to find. Tourists will be sped along new motorways to modern metropolis after metropolis, never having the luck to see wild China. The people are charming and friendly with a genuine desire to help when needed. Underneath all this charm you just know there is stone-faced commissar watching ever move.

They say China is one of the safest countries in the world. In part I agree, but its only safe if you play their game, by their rules. Freedom here means something quite different. A lot of effort is going into promoting the Olympics, why China wanted it and even more, why they won it seems a mystery to all. A country that spends so much time hiding so many things, asking for so many wandering eyes.