Karaoke in China and the West: Opposite Ends of the World

While I’m still recovering from yesterday’s office Christmas party karaoke marathon, I thought it would be an appropriate time to write about the vast differences between karaoke in the west and karaoke here in China.

Many westerners see karaoke as a drunken act of public humiliation. Someone’s name is called and they wobble onto stage and grasp the microphone in a death grip. Seconds later they are wailing out ‘Sweet Child O Mine’ while the entire bar stares with the kind of rapt fascination one typically sees on the faces of drivers passing a particularly gruesome car accident. It is a look which screams the realization: this could happen to me. 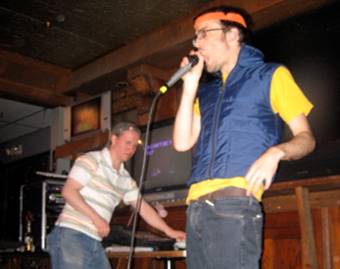 In the west karaoke rarely gets going until the later hours of the evening as most participants require a good deal of liquid courage to take the stage. After several hours of drinking the ‘fun’ can really begin. Once properly lubricated people really start getting into the act; there is caterwauling, air guitar, maybe even an ambitious air drum double-bass-pedal-tom-roll-stick-flipping solo or two.

Outside of the occasional bar night, some bars feature karaoke more or less monthly, westerners rarely partake in karaoke and when they do it’s with a mixture of embarrassment and a pitcher or two of beer. Once the deed is done and the night is over it’s rarely talked about. There are no statistics available but I’m going to go out on a limb and guess that for the average American bargoer drinking-induced vomiting occurs far more often than drinking-induced karaoke. 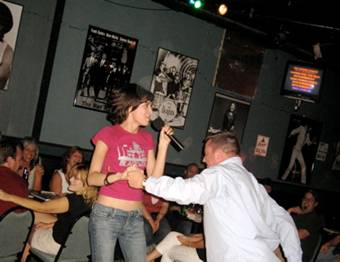 But if you dig a hole to China you will find that karaoke in the PRC is an entirely different beast. First of all, many people willingly sing karaoke (卡拉OK | kǎlā-ok). Going to KTV is a hugely popular activity here; Chinese don’t go to bars very much. And, mercifully, it is also a relatively private one. Instead of a stage and an audience of strangers, in China karaoke takes place in private rooms and only those that know and love you, or have to work with you, are at risk.

The first thing westerners will notice about karaoke in China is that shockingly little drinking occurs. There is tea, soft drinks, sometimes beer, wine, or the dreaded baijiu (literally ‘white liquor’ – think vodka but rougher) but, by and large, Chinese people sing karaoke sober. 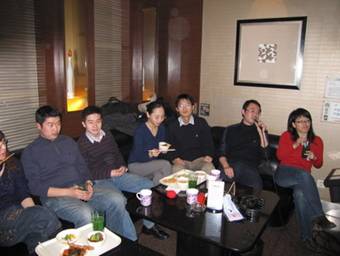 The first thing to do when karaokeing is to rent a room, usually the rooms accommodate anywhere from 5 to 20 crooners, and usually you pay by the hour. Afternoons are often cheaper than nights. Yes, people here sing karaoke in the afternoon. Usually, the prices are better the more hours you rent. Mercifully, some higher end KTV venues provide buffets which allow you to keep your strength up so you can belt out tunes for several hours.

Your average KTV room is equipped with sofas ringed around a big coffee table and some sort of electronic console for picking songs. In some places the console is a screen mounted on a stand and you can scroll through the songs, arranged by language, song title, artist or some combination of the above. Other KTVs will give you a binder or three of songs and a machine that looks like a  TV remote crossbred with a label-making machine that can be passed around and used to wirelessly add songs. The songs are added to a queue which – if you can figure out the machine – can be rearranged to prevent someone from singing four Boyz 2 Men songs in a row. If you can’t figure out the machine you can ring for an attendant to sort it all out. I can’t imagine what kind of nightmares these attendants have. Yesterday, a young man in a vest and nametag was forced to recalibrate our machine while I bellowed out Lil John’s ‘Get Low’ with the mic in one hand and a mug of Wu Long tea in the other. Probably not what the poor guy was expecting for Christmas. 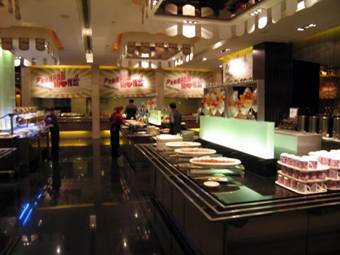 Attached to the karaoke console will be two microphones, although sometimes you can persuade them to attach more. The finer establishments will put on a new mic cover for you when you arrive which is probably a crucial sanitary precaution. Not to be graphic but a lot of spit flies during repeated renditions of the Titanic theme song.

The selection of songs varies greatly, and often randomly, from place to place. In general the more established KTVs tend to feature more of the older songs from Hong Kong and Taiwan –and, because most of the videos come from those locations the text is almost always in traditional characters. 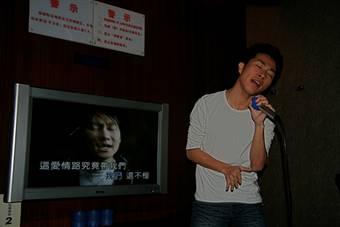 English songs tend to list heavily towards the classics, older ones like ‘My Way’, the Beatles, ‘Feliz Navidad’ (a quasi-English song); and newer ones such as‘Sweet Home Alabama’ or, yes, ‘Sweet Child O Mine’. Pop songs are always available as many Chinese enjoy singing them - Britney, Rihanna, Fallout Boy, etc. Songs from movies and TV shows are always big hits and in student-rich areas such as Beijing’s Wudaokou where the international population is larger you can find books of Korean, Japanese, and newer English songs.

One of the best parts of the karaoke experience is the videos. The TV in KTV refers to the videos that play on the screens behind the lyrics. Lower end establishments and home karaoke discs tend to be heavy on tourism videos. You can belt out ABBA and Jay Chou while feasting your eyes on the beaches of Spain or some Austrian village. For older Chinese songs there are often videos of performances of that very song and for newer pop songs you often get the actual video. Everything in between is usually covered by a couple of random Chinese videos. Yesterday, while I commanded my audience to ‘get low like an 18 wheeler’ a video of a tuxedoed Chinese man crooning in front of a similarly nattily attired orchestra played behind endless lines of ‘skeet skeet skeet’. 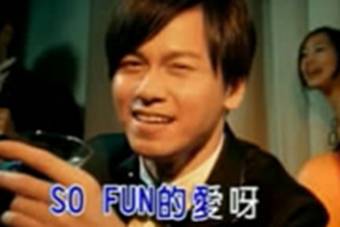 Even if you’re used to only singing karaoke under extreme duress, you should really give it a try here in China. Put enough reverb on the microphone, pitch the song higher or lower to match your pipes, and it might sound halfway decent. No matter what your chops, the purpose of karaoke is to belt it out, release stress, and have a good time. If you manage to learn a Chinese song or two you will greatly impress your Chinese companions, but if not you can always join together for a rousing rendition of ‘Everybody (Backstreet’s Back)’ – you’ll be shocked at how much you enjoy yourself. Next time someone invites you to ka-la-OK, just tell ‘em, ‘OK’!

To find karaoke near you just click on your city