7 Things in China That Could Kill You

Living in China can be dangerous. Whether it’s falling construction equipment, industrial-strength smog, or dodgy food, you need to be on your guard. Here is our guide to the major perils, and some advice on how to avoid them. 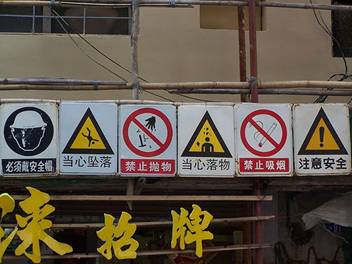 1) Fake peas
Fake peas? Yes. Just when you thought things couldn’t get any stranger, a man has been arrested in Changsha, Hunan Province, for producing fake green peas. The crafty merchant marinated hundreds of kilos of cheap dried snow peas and soy beans in green food colorant mixed with metabisulfite (an ingredient used in bleach) to give them the appearance of peas. Metabisulfate is a known carcinogen, and stops the body absorbing calcium. Great. Apparently this sort of thing has been going on for years, but can’t be declared a “food safety incident” until someone dies. To avoid an OD of metabisulfite, just don’t eat any peas from Hunan Province.

2) Recycled cooking oil
This one has been all over the news recently, thanks to a raft of vomit-inducing photos showing grease wallahs stirring huge, steaming cauldrons of food slurry. The practise of boiling restaurant waste to extract re-usable oil came to light earlier this year when a team from Wuhan Polytechnic University discovered that one in 10 meals in the area were made using recycled cooking oil. The State Food and Drug Administration took the reins and issued warnings to the country’s health bureaus to weed out the vile practise. Aside from being downright disgusting, this re-used oil contains a chemical called aflatoxin which is highly carcinogenic. How to avoid it? Don’t eat street food, and stay away from cheap restaurants where the oil may be used.

3) Falling cranes
The construction boom has claimed countless victims over the years, but one of the saddest incidents has to be the death of five kindergarten pupils who were crushed when a crane fell on their school near Zibo Town, Shandong Province. With so much development taking place across the country, and the less-than-safe construction methods sometimes used (bamboo scaffolding?) you should keep your wits about you when you’re outside. Don’t walk under scaffolds or cranes, and be careful you don’t trip over errant wires or pipes. The Chinese don’t really do compensation, so if you do fall over, you won’t be getting any pay-outs from the local government.

4) Sofa burn
You wouldn’t expect the humble sofa to present many dangers (aside from the possibility of pathological laziness) but couch potatoes take note: a batch of sofas made in China was responsible for two deaths and thousands of injuries in the UK. A Chinese company called Linkwise supplied a batch of leather couches to British stores which were infused with an anti-mould chemical called dimethyl fumarate. And it fumed, alright. People who bought the sofas broke out in horrible rashes and many had to be hospitalized. Two senior citizens died from heart failure caused by the stress. To avoid sofa burn, never buy from Linkwise, and make sure you get the shop assistant to sit down on the sofa before you do.

5) Baijiu binges
We don’t have to warn you about the dangers of baijiu. Just a whiff of the brutal brew is enough to turn the stomach of even the doughtiest drinker. Granted, a shot here and there isn’t going to harm, but if you binge like Japanese sound engineer Moriyama Shiyouta in Guangdong province, you could end up dead. After a hard day of sound engineering, Shiyouta kicked back with a bottle of baijiu, and ended his night (and his life) projectile vomiting through his nose. You have been warned…

6) Bad vapors
China has some of the most polluted air in the world. Thanks to heavy industry and a penchant for cars in cities, smog is a common sight (and smell). Sometimes the sky actually looks yellow, which can’t be good. We’re not convinced of the preventative properties of those face masks that people seem to be fond of, especially ones with Hello Kitty on them, but they might keep out some of the more harmful particles. The masks fitted with carbon filters are more expensive but vastly more effective. Either that, or stay indoors, but that’s hardly practical. Until China bucks its ideas up where pollution is concerned, this is something we’re just going to have to put up with.

7) Marauding tigers
Okay, so it was actually a zoo keeper who was mauled by a tiger at the Shanghai Zoo earlier this year, but tigers in the wild can get stroppy too. In March 2009, a man surnamed Guo was killed by a wild tiger when he and his friends decided to explore the wilderness around the Great Wall close to Beijing. Guo, aged 20, was picked off from the group and devoured. The moral of the story is: don’t go off the beaten track in tiger territory, unless you’re prepared for a chewing. Wildlife is by nature wild – in the words of Chris Rock, “That tiger didn’t go crazy, that tiger went tiger!”

13 Common Scams and How to Avoid Them
I Want To Raise My Family in China – Am I Crazy?
Crime and Punishment: How To Stay Safe in Guangzhou

You mention Ningbo. Of all the cities I have been to in China this is the only city where the cars have stopped for pedestrians at a pedestrian Crossing. I thought it was very clean and the people were friendly and outgoing.

You been drinking to much! Go to a club and see how easy it is to score drugs or what about the drunks driving or riding their scooters around in the middle of the night. Theft is also a huge issue as is Violence! Have to love when Chinese people let a woman get beat almost to death (9 witnesses) by one little man and not one of the people around help. Open your eyes fool. Why do you think so many Chinese are trying to get out of China?