2016 was a year of great change: Brexit, Trump, Cubs winning the World Series, Portugal winning the Euro Cup… To add to the list, China has even drastically changed its policy towards laowai visas. Now, the PRC will classify you as either an A, B or C-listed foreigner. Depending on your grade, it can (and will) affect your legal status living and working in the country. So let’s push all political correctness aside for a second and find out: how valuable of a foreigner are you? 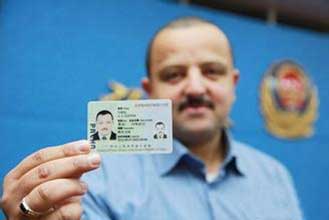 The first part of this step is giving foreigners ID cards, just like local Chinese have. That’s right, you will no longer have to bring your passport in your pocket everywhere you go, rather just a plastic card that fits easily into your purse or wallet. Along with your photo, your ID card will also have a unique individual number, along with your A, B or C ranking (more on that in a bit).

On one hand, the pros are obvious: it’s much easier to carry an ID instead of passport. It will also be easier when purchasing things like train tickets, or checking in to a hotel, or just about anything else when presenting your passport. On another similar note, China has also extended its e-channel border crossing service to foreigners, showing further integration of foreigners into society.

On the other hand, there is one big con. The main reason the government is so kindly giving IDs to foreigners is to better track your every step. It’s a brave new world, big brother! Don’t be surprised if fines or other consequences will arise for those who don’t carry their ID when pulled over for a random police inspection.

In first-tier cities, the grading system is already in place. For those living elsewhere, it should be in tact by mid-2017. From that point on, just like celebrities, all foreigners will be classified as A, B or C-listed. There will be a point system in place that determines your ranking. Though the government hasn’t officially stated what factors are used in the ranking criteria, the Beijinger and New York Times did post articles on their speculations. Based off their info along with our own assessment at eChinacities, this is what we came up with:

Why are they doing this?

The same New York Times article stated: “Class A will include top professional, [along with] innovative and creative talent... Class B will include other professionals who fit with China’s economic development plans and could fill short-term gaps, especially in management and technical areas… There will be limits in international trade, sports, culture and education. Class C will include unskilled or service industry workers. These should be ‘strictly limited.’”

Obviously, the government is looking to attract more professional foreign talent while simultaneously limit the amount of lower-skilled foreigners entering the country. Years ago anyone could enter/work in China, but that attracted a lot of bad apples, as seen with this eChinacities article, but the country has made great strides trying to regulate who gets the “privilege” to reside in the Middle Kingdom.

There are also an estimated 200,000 to 2 million illegal aliens living in China that the government would apparently like to sweep out. Instead of building a wall like President-elect Trump proposes, China has opted for an ABC grading system.

What can I do to improve?

If you’re worried about where you rank and whether it will affect your long-term plans in the country, here are some tips from our eChinacities team on what you can do to increase your grade:

• You may be able to use the salary ranges to get a raise from your boss. For example, if you’re making 29,000 RMB per month, present the facts to your boss to let he or she know that adding an extra grand to your salary each month will be enough to secure your job security by keeping you in the country. Hey, it’s a long shot, but give it a try, it just may work!

• If you need an extra 5 points, consider doing a Masters or get your MBA while living in China. Check out our eChinacities article on best universities for foreigners in China.

• In regards to work experience, there’s not much else you can do but stay in the country longer. For age and residency, well, there’s really not a lot you can do in this regard either. You can’t win them all.

• Brush up on your Mandarin. HSK II is very basic, as you only need 300 vocabulary words and a few simple grammar points. Just a few months of studying should be enough to raise you from level I to II (adding 6 points to your score). Making the transition from HSK IV (1,200 vocab words) to V (2,500 vocab words) is a bit harder, but doing so will give another 4 points to your mark.

In my point of view ;It is not that bad unless you have a C class ID and treated as a C class person somehow!!

Good move. Australia also has this point system where you have to sit for IELTS of Cambridge English language exam.

This is really to bad for a lot of good FTs who enjoy teaching and are good at it. I suspect there are many FTs is a similar situation to mine. Married to a Chinese citizen, a degree from 40 years ago, 6 years experience teaching in 3rd and 4the tier cities, and with white skin from North America, also a native English speaker, but born in the year of the rooster. I want to see how many points I can get!

so lets see if i have this right A, ass kisser to china, hate your own country B, barely qualified, but a bad example to make fun of and show china superiority C, bottom of the barrel, for the folk who live in the countryside or the rich who want to have a slave to help hold their elite nose in the air. thanks for the info, very useful

Be classified as a person...reminds me of 1984. But I hope the changes are not so severe

http://www.shanghaiexpat.com/blog/shanghai-first-city-to-issue-new-work-permit--40038.html so this site actually has a different rating system which looks much more useful than the above... I mean why would they rate YOUR class depending on the shittyness of the city level?

The classification of different tiers from A (best) to C(worst) is nefarious form of discrimination that does not bode well for foreigners residing in China. These classifications hark back to racist policies of white spremacist Protestant America and Brits of 19th century. Legistation restricting Chinese immigration were restricted to quotas far below desirable whites from European countries producing a world of hate and racism. If we do not learn from the mistakes of the past, we will repeat the follies of our ancestors.

I'm a B (score 68.) This will really make it hard for about 2 years for China to attract new teachers. We'll have to wait for them to suck it up and do all the paper work themselves than apply for the Z visa.

Not only for teachers, if these numbers are correct, then it will be hard to attract experts in any field. I am an IT professional myself, HSK 5, double M.Sc., and get max score in all categories except university rank (rank 242) and number of years in China. I can never be ranked as class A in a first tier city according to this score system. If I work five years in China, then I will be able to just barely make class A if I stay in a second tier city. This system seem crazy or they got the numbers totally wrong.

I won't be able to work because I was born on woman's day 60 years ago. So I will now have a class C visa. I do have a family visa. So my question is does this apply to only work visas?

New teacher with no experience and a degree from a low ranked university wants to work in China. He/she is automatically a class C. Good way for a recruiter to give them a low wage like 6,000 rmb per month in a 2nd tier city

So let's see if I get this right: If you are not a graduate of a top 200 university, then you will NEVER be class A when you start to work in China (0-2 years work experience in China)? So PhD, 20+ work experience and top expert in his field, earning 100k+ a month, HSK VI, will still be a class B when starting in China?