Hey all! It’s a warm spring’s morning and as I’ve got the morning free and am nursing a mild hangover I thought I’d give some writing a whirl. Last night a few friends and I headed out for a few street beers as the weather was lovely and I was in an equally lovely mood. Ha! Anyway, during the consumption of said beers we also stumbled upon a guilty pleasure of mine (and I’m sure one of yours too), and that is Chinese street food. Yes I’m well aware that the sanitary levels aren’t usually desirable, and yes I know full well that I’m probably knocking days of my life which each bite of these gutter oil covered lovelies, but they taste great nonetheless. Here, I’m gonna run through a few of my faves that have become a part of my staple diet here in China – for better or for worse!

At least I hope that’s what they are…there’s a lady who sells them right across my street, and they provide a great snack on the go. They come on a stick of four or five and are cracked into these tiny moulds until the heat from whatever device they use fries the eggs around the sticks. Then they dip them in some mysterious yet wonderfully tasty brown sauce. Great! 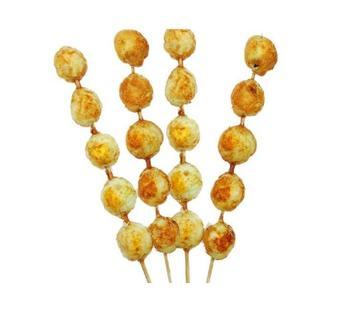 I’m not sure what the official name for this is, so I’m just going to affectionately name it “Eggy Bread,” and hope that you know which one I’m talking about. If not I’m sure the picture helps. Although these can be pretty oily, they serve a great breakfast snack on the way to work. An egg is first fried with dough, which forms the bread, and then the vendors brush it with either brown or spicy sauce, and you have the option to fill it with either lettuce, a hot dog, or a rash of bacon; or all three! Cheap and cheerful all the way. 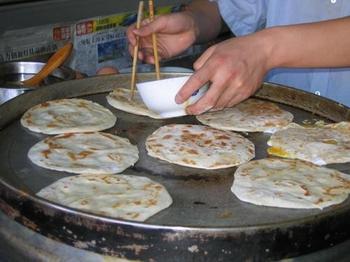 A Cantonese delicacy I’m told. I love the way they make it – each Chang Fen, (I’m not sure if there’s an English name) which is a thin line of pastry, is stacked up in this boiling bamboo case until they’re ready. Then they’re taken out, rolled up and with a dash of soy sauce make the perfect snack after a night out on the town. Light and filling – a concept that the Cantonese seem to have mastered wonderfully. 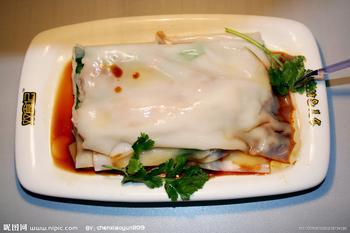 The classic Steamed Buns or “Baozi” will be a symbolic representation of my time in China, and I’m sure it’s the same for many others. It’s all about the filling, and they have it all. For me, my favorite filling has to be the “Disanxian” (地三鲜), where they add egg plant, peppers, and potatoes. Also the Mapo Tofu (麻婆豆腐) one isn’t too bad, if a little greasy! 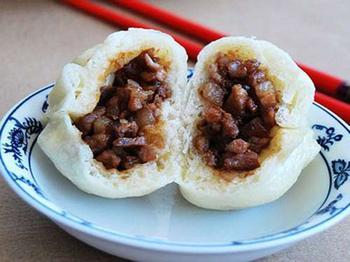 Luckily for me, being close to Shandong Province gives me access to all their local delights, and one my favorites-which to me is the mother of all street snacks in China-is the Shandong Jianbing, although you may be familiar with its smaller cousin, the Jianbing Guozi (煎饼果子). This beast is prepared by steaming a large circle of dough mix on a giant black hot plate, then cracking an egg on top while the pastry hardens. Then, it’s flipped over and seasoned with spring onions, that mysterious brown sauce (yet again) and some spices if you prefer. If you want, you can add a hot dog or some lettuce to the mix to max out the calories and really fill you up. All that for only four or five kuai. Fantastic! 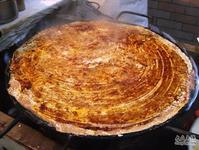 Have I missed anything? Got any additions to the street food list? Let me know!

I would like to add Stinky Tofu to the list. I know it's not everyone's favorite, but you either love it or hate it. For me, it's all about the sauce that comes with it.