All Go at the School Talent School

Having been in China for long enough now I know that daily encounters of events both strange and amusing,intriguing yet frustrating, are nothing out of the ordinary. This was reinforced only the other morning when, upon teaching my students the present perfect grammar (have you ever…), and consequently being asked “teacher, have you ever cooked your grandmother’s eyes?”

It had never occurred to me however that I would ever be the center piece of one of the many obscurities that China frequently throws at me, utterly contradicting all my previous mockeries and bemusements toward my current country of residence. It wasn’t out of choice though I hasten to add…

Our reasonably close-knit team of foreign experts (as we call ourselves on a daily basis just to make us feel more secure), were recently required to arranged and perform a kind of talent show in front of the whole school and staff. Now, as someone who isn’t a classically trained performance monkey I naturally raised my bushy black eyebrow at the very concept, particularly when we were given the choice of either performing a pop song that the students could sing along to, enact a magic show, or do a role-play where we playing the role of naughty students ina Chinese language class winding up an ever-suffering Chinese teacher.

Although none of them were hugely fanciful (save perhaps the last) we took a vote and ended up with the one I feared the most – the song. But what Western song could a group of teenage Chinese middle-school possibly recognize? After much debate and discussion, one of my colleagues, now known simply as He-Who-Must-Never-Ever-Be-Named,suggested we do a number from the ever-fruitful back catalogue of 90s hunks The Backstreet Boys. Oh joy, I thought to myself. The song in question was of course the heart-breaking yet beautiful I Want It That Way.

As the performance day arrived,I was of course rattled with nerves (and embarrassment). We approached the stage in wake of a series of thoroughly rehearsed renditions of orchestral classics and traditional Chinese songs performed by the staff and students alike, though any fears that we had a lot to live up to were quashed when we were greeted with cheers and smiles from the sea of students awaiting our special moment. 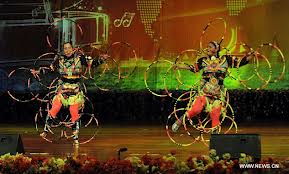 My actual recollection of the performance is a bit of a blur, though I doubt it was due to my sheer enjoy mentor “being in the zone” as a budding boy band revivalist, rather my not knowing what on earth I was doing. It was only after the show that the relaxation kicked in and high fives were made all around the foreign teacher team (as well as what sounded like calls for an encore from the students…eek), and I jotted the event down in my memory as one of those unique occurrences where you end up doing something you swear you’d never do in a billion years but actually don’t have any regrets in doing it. I’m sure there’s plenty more of those to come over the course of my time in China.