A Weekend in Tianjin – 1st and 2nd Tier City Chasms

I’ve been living in Beijing for a few years now, and though I don’t think it can quite claim to have full “international city” status in the why that Hong Kong or possibly Shanghai do, it’s still pretty modern and forward-thinking enough for a dumbass foreigner like me to maraud their way around relatively unscathed. If there’s anything you want, Beijing will have it, and although it may be hard to find and expensive, you still aren’t going to be disappointed should you feel the need for a slice of Edam cheese in the middle of the night. Regarding the nightlife, we’re probably China’s best location for international bands, and although the touring roster is limited, we still get acts like Elton John, Bob Dylan, Public Image Limited and Gang of Four making the rounds.

Due to its sheer size, Beijing can make you feel as if you’re stuck in a bubble, and the rest of the world is a million miles away (at least that’s what some local Beijingers may have you believe!) but still, I often find the urge to get away from the noise and the chaos and into a more quaint, quieter location, which I why I chose to go to Tianjin last weekend…ha ha.

I’d been meaning to go for some time (mostly to experience the bullet train), though never got round to it until last Friday night, when my girlfriend and I took the chance to see friends who was passing by in Beijing’s almost-equally-gigantic sister city. Upon arriving at Tianjin station, Tianjin looked just as modern as Beijing. There were interestingly designed high-rises, flashy lights, a modern subway, and a nice winding river and riverbank with a nicely lit-up European bund-esque concession on the side. To be honest, I had a good first impression. It seemed more like a “real city” in many ways, with an obvious city center, and a river winding through it. 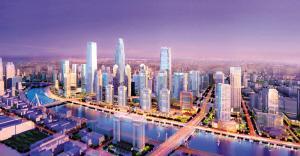 Then it struck me – the trap that I fall in upon visiting every city in China – don’t judge a book by its cover/flashy lights…it’s all a face thing! Although it’s a huge city, I wasn’t expecting it to be as cosmopolitan as Beijing, though the difference did overwhelm me. Upon getting on the subway there was no order at all, and although Beijing can’t claim to be a saint in this aspect, at least there are some lines resembling queues and a basic understanding of letting people off first. Here, it was a pure free for all. During meals, I was stared at and giggled at by locals who were shocked to discover that I spoke Chinese. Although it didn’t bother me too much (I found the attention quite fun), I had gotten too used to being unnoticed whilst in Beijing.

The same happened in a nightclub, where my girlfriend and I went to meet her friends. The place was full of loud, macho twenty somethings who were all showing of and all looking for a fight. Now that’s not exclusive to Tianjin, in fact you’ll find that anywhere in the world, but I think what surprised me was the whole unrefined-ness of it all. Yes I know, living in Beijing has made me a snob!

Still, I have to say all in all for my couple of days spent there, I enjoyed Tianjin. There may not be a lot to see on the touristic side, though for a weekend trip, it’s perfect. My point in writing this blog (without sounding too snobby) is how everything felt a step back from Beijing in terms of things going on. Back home, almost any city would have an active nightlife, a good array of pubs and bars, an international restaurant scene, and a cosmopolitan crowd. Tianjin, as one of China’s top 5 biggest cities, simply highlights that despite the glamour of Shanghai and the fascination of Beijing, China still has a long way to go in terms of bridging its gaps between the services and modernity of it’s smaller cities.