Today I'd like to talk with you about the CBD of Guangzhou. 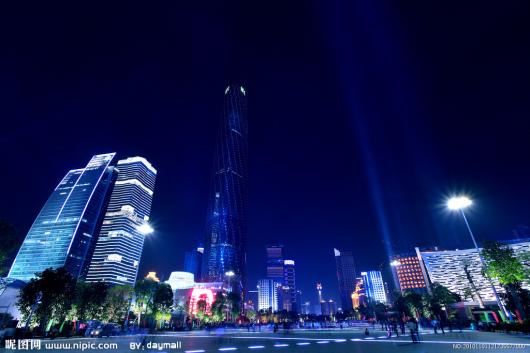 LOCATED in eastern part of Guangzhou , Tianhe District is the geographical centre of the city. It covers an area of about 139 square kilometres, with a population of 1.2 million. Starting from Tianhe, through convenient and fast road and rail transportation, you can easily reach the new Guangzhou Baiyun International Airport , Guangzhou Huangpu Port , Nansha Port , and every corner of the Pearl River Delta - the manufacturing centre in South China .

Position
Tianhe District, incorporating the functions of commerce, emerging industries, information technology, culture and education, is the central district of Guangzhou. The prosperous economy and commerce within the District have attracted many large shopping malls and class-A office buildings represented by Teem Plaza and CITIC Plaza respectively, leading the District into being one of the most competitive and influential areas in Guangzhou.

Characteristics
Tianhe District adheres to a sustainable development strategy of invigorating the District through Science and Technology, strengthening it with education, building it with care for environment, and positioning it with culture. It strives to create an environment suitable for both business and living and has achieved a sustainable, healthy and rapid development of its national economy. In 2004, the whole District achieved a GDP of 60.5 billion RMB, ranking the first among the ten districts in Guangzhou . The proportion of the three industries are 0.2: 25.18: 74.62. The economic development is featured by highly developed tertiary industry and rapidly developed high-tech industry.

Modern commerce and trade including finance, telecommunication, advertisement and hotel become important industries of Tianhe District. With Grandview Plaza and Teem Plaza taking the lead, the core commercial area centered in Tianhe Sports Center and new city axis enjoys a good reputation and becomes one of the most important golden commercial areas in Guangzhou . The New Pearl River City in south-west Tianhe District under rapid construction is a central business district (CBD) approved by the State Council and will be a modern commercial and trade center in South China and the financial center of Guangzhou .

Tianhe District boasts of rich resources of talents, education and R&D capability. There are 56 institutions of higher learning and R&D in the District. Tianhe Software Park is listed among the ten most important software manufacturing bases in China . As being the industrial base of internet gaming and flash in Guangzhou , Gaotang New Zone within the Park has become an important support to the District’s aim of developing high tech industry. Areas like Shipai have become the largest distribution center of information technology products in South China, having attracted many large sales and exhibition centers of IT products, such as the Pacific Computer Town .

Zhujiang New Town is already falling apart less than 10 years after it began to be built. Not too long ago there was a rumor that one group of people was crushed when one building's cladding part fell on the street, of course it wasn't reported by state-run medias. Just look up at the buildings and you will see rust on many of them.