With my last blog being about the joys of the Xiamen rush hour, which to my disappointment blew any utopian images I associated with the city right out of the water, I’d like to share another “only in China”experience which I think would only occur in a second-tier city like Xiamen that isn’t known for being full of foreigners.

Again, thanks to the wonderful connections of my school, I was told that there was an opportunity to earn a bit of money by “helping someone”.Whatever that could have possibly entailed, your guesses were as good as mine.

Now before I get into the gory details of this anecdote – I need to make something clear. I am a very clumsy person. It’s something that hasn’t served me too well over the years admittedly (I once knock over a pint of Guinness allover a girl’s dress as I went to shake her hand), and it’s something which seems to magnify with age.

So anyway, know that you understand this about me I hope you won’t hold any negative feelings towards me after reading this blog. Clumsy idiot, now that I can handle, but anything else against my character and it becomes war.

Now where was I...ah yes. After being told to “help someone”we were escorted a large luxury hotel situation in the center of Xiamen (I forget the name). Upon arriving, the teacher who had travelled with us abruptly departed, leaving me and my colleague clueless as to what was going on. We were soon handed tuxedos and shirts however, and were told to change. After this we were led to a pleasant rooftop area that had lovely views of the city, and were told to hold a tray and a few drinks. Then it hit me – we were being used as foreigner waiter monkeys. To who, I wasn’t sure of, though I managed to get a simple “important people” from the broken English of a nearby hotel staff.

On the night, the rooftop was packed with wealthy looking Chinese businessmen, actors, officials and other celebs complete with a full media crew. We were then given a quick briefing. We were told to carry out trays of champagne and wine and serve them to the many high-class aficionados who were sat around listening to live classical piano music whilst they tucked into a European-ish style buffet. Apart from my hand hurting, I managed to overcome the feeling of being used for the color of my skin and got into a confident stride, serving  drinks left right and center at a lightning-fast pace.

It was then that disaster struck, as my confidence was soon quelled by my good old clumsiness which resulted in spilt wine all over an official’s expensive looking dinner jacket. His reaction wasn’t too bad, as he looked up at my petrified face and simply muttered a relieving “mei shi”,though the hotel manager didn’t look too impressed. 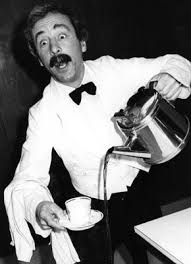 As the evening ended I managed to strike up a conversation with some English-speaking celebs, and even shook the hand of the local weatherman. All in all, another surreal China moment for the scrap books, one which I ended up getting paid for and even being allowed to stuff my face on the buffet once the rabble had departed.