The Chinese Rush Hour is like a Hollywood Action Movie

Like many fellow expats, I’m a teacher here, and for the most part enjoy my life in China with a reasonably comfortable salary and decent standard of living. My school is barely a 10 minute bus ride from my apartment,and as it’s a private training center, I only really have to work on weekends,with the occasional evening class popping up here and there. Perhaps I should be grateful for such a relaxed life, especially with the sea-air and green environment of Xiamen on my doorstep.

This was until recently however, when our school agreed a contract with a local…well I say local…kindergarten, which I was required  to teach on a twice-weekly basis in the morning. No complaints I guess, and I looked forward to the prospects of releasing my inner-child and going crazy in front of a bunch of 2-year-olds (the interesting results of which I will save for another story…ahem).

What I hadn’t foreseen was during my pick up and drive to this so-called nearby school (it took over an hour), was that I would experience the rush of the Chinese rush-hour at full blast, which for a second-tier city like Xiamen, is surprisingly horrifying. 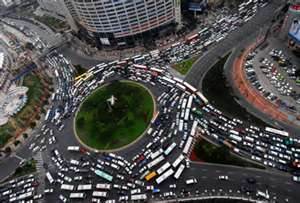 There are no rules…

I’ll start by introducing my driver, as we have bonded over the weeks with my attempts at broken Chinese and his heavily accented Fujian-style Mandarin. I soon found out that he was a former soldier, and the after the usual array of “are you married” “how much do you earn” questions, he loved nothing better than to talk about tanks, helicopters, war, conflict, war,tanks, soldiers, guns, tanks, war, and fighting. I felt a bit sorry for him as I was often quite sleepy during our trips, though he was certainly passionate in his field of expertise.

His passion was also evoked in his driving, which would have been great if we were hammering it along some open stretch of highway. But we weren’t. This was the Xiamen rush-hour, where it’s a dog-eat-dog world where no one gets out alive (excuse the cliché Hollywood tagline phrase). His aggressive driving caused me to soon hold onto the handrail on the car door and clench my teeth as we wove in and around traffic at high speeds. Incidents I remember seeing along the way was a car that bumped into the back of another causing the two drivers to get out and scuffle in the middle of the road, a poor young man who was knocked off his bike at a deadly intersection, and to top it all off…(continue reading below…ahem).

As we were exiting a highway, I noticed that some barriers were missing at an elevated windy road. After peering down onto the green below, I saw that a bus was lying upside down, wheels up, with people slowly crawling their way out from the windows, just like a Hollywood action movie(hey, maybe the tagline was relevant after all). I looked on in horror, and judging by the absence of the emergency services concluded that the accident had only just occurred. 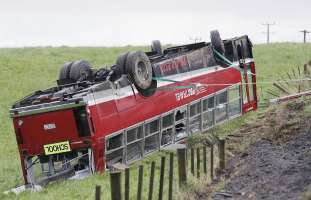 The driver couldn’t care less about the whole affair, as he drove on aggressively in  his army style manner, as I sat there thinking how I could mentally prepare myself to face a bunch of crazy kids after seeing such a sight.